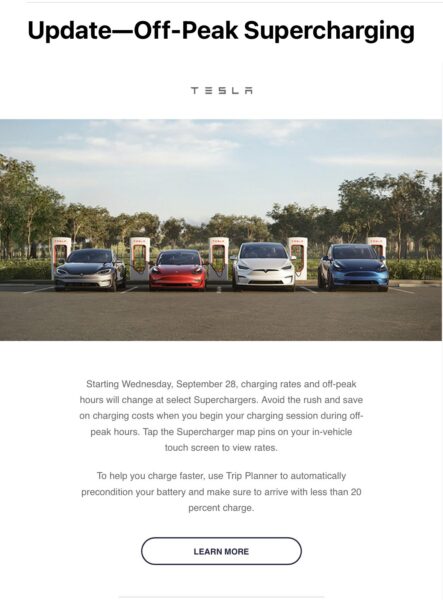 As Tesla continues with plans to open its Superchargers to non-Tesla vehicles, the automaker plans to shift its charging rates and times at certain locations.

Tesla is updating its charging rates at select Supercharger locations starting on Wednesday, September 28, according to tweet spotted by @Whole Mars Blog.

In the screenshot, Tesla says that users can save money by charging during off-peak hours, with the available hours set to change at most locations.

“Starting Wednesday, September 28, charging rates and off-peak hours will change at Select Superchargers,” writes Tesla in the correspondence. “Avoid the rush and save on charging costs when you begin your charging session during off-peak hours. Tap the Supercharger map pins on your in-vehicle touch screen to view rates.”

Some rates have gone up, while some have gone down, according to Sawyer Merritt.

NEWS: Tesla has announced they are raising Supercharger rates in select areas in the US starting today.

In July, a White House memo hinted that Tesla’s Superchargers could open to non-Tesla EVs by the end of the year. Shortly thereafter, Tesla launched a $0.99 per month Supercharger subscription for non-Tesla EVs.

Tesla also sought public funding to help expand Superchargers to non-Teslas, as the automaker will be significantly increasing the number of charging stations available for drivers of other EV brands.