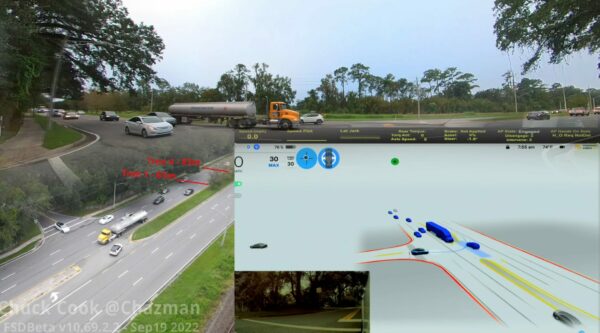 In the video, Cook stops adjacent to a busy six-lane split highway road to make an unprotected left onto the street’s furthest side. The result is a set of succinct turns that Cook calls a “hundred-percent” performance — especially compared to previous tests of the maneuver.

Cook mentioned that the initial creep was a little uncomfortable, but that everything else about that unprotected left turn was flawless, despite the heavy traffic.

Tesla said last week that the FSD beta 10.69.2.1 would start deploying to those with safety scores above 80, while version 10.69.3 would roll out after AI Day.

A New York Times journalist also did a ride-along in Tesla’s FSD beta 10.69.2 for an upcoming story, saying by the end that he had become comfortable and trusted that the car wasn’t going to cause an accident.

You can watch the full video breaking down Chuck Cook’s unprotected left turns in medium to heavy traffic below.

Tesla’s Gigafactory Texas is reportedly aiming for 75,000 units of the Model Y in the first quarter of 2023, according to an unnamed source who shared the information with electrek. The figure equates to more than 5,000 units per week at the site for the entire quarter, marking a significant production increase from the 1,000 […]
Peter McGuthrie
15 hours ago

As Tesla heads into the final month of the year, the automaker is looking to boost customer orders with a new discount option for its flagship sedan and SUV models. Tesla is offering a $3,750 discount on Model 3 and Model Y orders in North America, as seen in a text message sent from the […]
Peter McGuthrie
17 hours ago