2022.28 comes with the new Alternate Routes feature, Theater Mode improvements, and a few new games, among other things. It apparently also adds additional information to Service Mode (via @Teslascope).

Service Mode is a debugging utility designed to help service personnel diagnose problems on a Tesla EV. Even though the code to access Service Mode is just “service,” the feature is geo-locked and can’t be triggered unless the car is physically at a service center.

Tesla owners typically can’t even get into Service Mode, so it’s obvious why Tesla didn’t put the changes in its consumer-facing release notes for 2022.28.

New in 2022.28: Additional information is now available in service mode, including viewing the status of your vehicle’s GPS and various other components. pic.twitter.com/uFujllta2S

In software version 2022.28, Service Mode offers a lot more information about your Tesla. This includes the status of the vehicle’s GPS systems, infotainment ECU, Autopilot ECU, and radar. 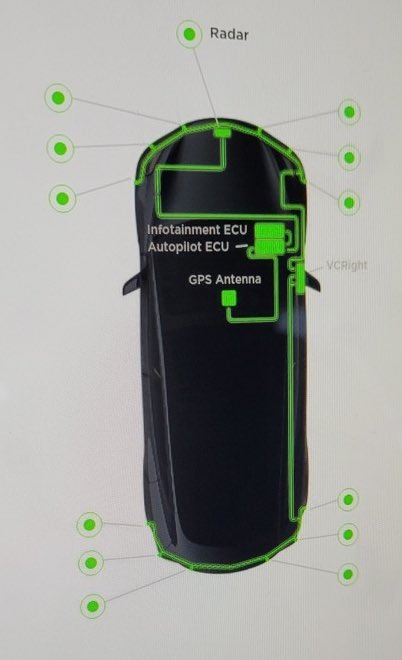 According to another tweet from @TeslaUpdateInfo, the update also brings some other minor changes. For example, when Theater Mode is minimized, the climate, volume, and brightness controls have now been removed and replaced with a “Swipe down to dismiss” bar (the bar looks like it’s borrowed from Apple’s iOS).

These shortcut controls are no longer needed since you can now minimize the video player in Theater Mode in 2022.28 to access main vehicle controls, without needing to exit your streaming video app of choice. It makes sense and gets users more familiar with the changes, specifically the ability to swipe the Theater Mode video player down.

Tesla has also redesigned the battery and charging status icons. When charging, a green lightning bolt shows beside the battery percentage and the battery icon is green.

With the addition of minimising theater mode; the climate, volume and brightness controls have been removed in favour of a simple “Swipe down to close” bar. The battery icon has also been redesigned with a new charging status icon. pic.twitter.com/v93KyOXL3e

Expect 2022.28 to keep rolling out to more vehicles. We’ll keep you updated when it hits the Telsa North fleet.

Tesla has announced it will be removing ultrasonic sensors from its vehicles, the next step of its camera-based Tesla Vision Autopilot. “Today, we are taking the next step in Tesla Vision by removing ultrasonic sensors (USS) from Model 3 and Model Y. We will continue this rollout with Model 3 and Model Y, globally, over […]
Sarah Lee-Jones
38 mins ago