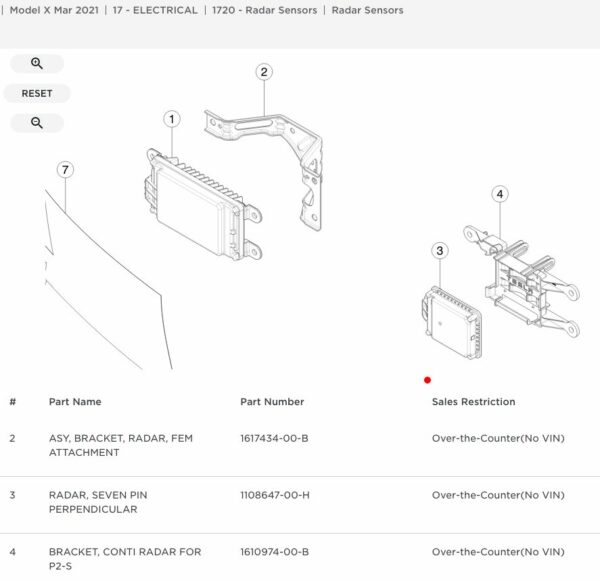 Tesla could be preparing to add a new high-definition radar to vehicles, as seen by @GreenTheOnly on the automaker’s parts catalog.

Green also confirmed the piece of hardware with an application to the Federal Communications Commission (FCC) that matches the Tesla EPC catalog.

Many in the thread wondered why Tesla would switch back to radar components after moving to camera-only sensors last year, dubbed “Tesla Vision.” In response, Green noted that it’s likely a high-definition sensor, assuming it is the same part as listed in the FCC application.

Looks like the new Tesla radar just made an appearance on Tesla EPC ( item #1, no description, but has a matching radar bracket, old style radar is 3 with different bracket).
Model S also has it, but no picture. pic.twitter.com/5RDQV6h7PY

Others in the thread also noted that Tesla CEO Elon Musk has said in the past that high-definition radar could be a useful addition to the company’s camera-based sensors — likely the same hardware Green spotted this week in the EPC and FCC filing.

Green also noted that the part could be retrofitted for older builds if it uses the same harness as the old sensor, though Green also says this is unlikely.

The developer suspects this new radar sensor will be used with next-generation Hardware 4.

Tesla’s cars still including radar-based sensors were finally transitioned to the camera-based Autopilot in recent weeks with software update 2022.24.6, though the automaker’s Model S and X units began receiving the new update as long ago as last year.