According to PCMag, SpaceX has filed a formal appeal against the U.S. Federal Communications Commission (FCC)’s decision to rescind $886 million USD in federal funding for its high-speed satellite broadband service, Starlink.

The FCC awarded SpaceX $886 million under its Rural Digital Opportunity Fund (RDOF) back in 2020 to deliver high-speed Starlink internet to rural and underserved areas across 35 states. However, the Commission rejected the funding last month after reviewing SpaceX’s long-form application.

“The decision should not be allowed to stand, leaving the people in these rural areas across our country behind yet again,” SpaceX said in its filing.

As for why SpaceX’s funding was overturned, the FCC cited Starlink’s high cost to consumers and wasn’t confident that the service could deliver fast enough speeds.

Starlink currently costs $110 per month in the U.S., along with a one-time $599 fee for the accompanying hardware. The service has, however, seen significant price cuts in other parts of the world in recent weeks.

Under the RDOF program, the FCC is looking to supply gigabit internet speeds to more than 85% of the covered rural regions and download speeds of at least 100 Mbps to all 99.7% of the selected areas in the coming years.

However, SpaceX alleged in its appeal that the FCC has a “clear bias towards fiber” over using satellites to deliver high-speed broadband, despite Starlink’s history of success and speedy deployment.

Back in June, Ookla reported that Starlink speeds went up by 38% in the U.S. and 58% in Canada over the past year.

SpaceX, meanwhile, claimed it submitted internal data to the FCC that demonstrated Starlink would be able to achieve the RDOF program’s speed goals by 2025. This data included publicly-redacted details on SpaceX’s financial revenues from Starlink and how much capacity the satellite internet system needs to deliver high-speed broadband.

“The Bureau’s endorsement of Ookla’s data over SpaceX’s detailed submissions is unexplained, unjustified, and fails on its own terms,” the company wrote in its filing, later adding: “The Bureau’s decision holds SpaceX to standards not adopted by the Commission for the RDOF program. Indeed, these are standards that no bidder could meet today.”

SpaceX went on to clarify that the cost for Starlink would have been lower for subscribers covered by the RDOF program.

“​​The suggestion that Starlink pricing justified the Bureau’s decision likewise makes no sense. SpaceX never claimed it would use its current pricing in the RDOF territories (indeed by law it cannot),” the company said.

SpaceX also questioned the FCC’s decision to withdraw the funding even though there were no other bidders for more than half of the areas the company won.

“Finally, in most areas won by SpaceX, it appears no fiber or 1Gbps provider even submitted a bid,” SpaceX argued. “Of the 19,233 census block groups awarded to SpaceX, 11,024 (57.3%) did not receive a single Gigabit tier bid.”

SpaceX is planning to perform a static fire test of the Super Heavy Booster’s 33 Raptor engines, after a successful “wet dress rehearsal” (WDH) of Starship 24. To do so, SpaceX is destacking Starship 24 from Booster 7 to prepare for the static fire test, both of which represent the company inching closer to launching […]
Peter McGuthrie
1 day ago 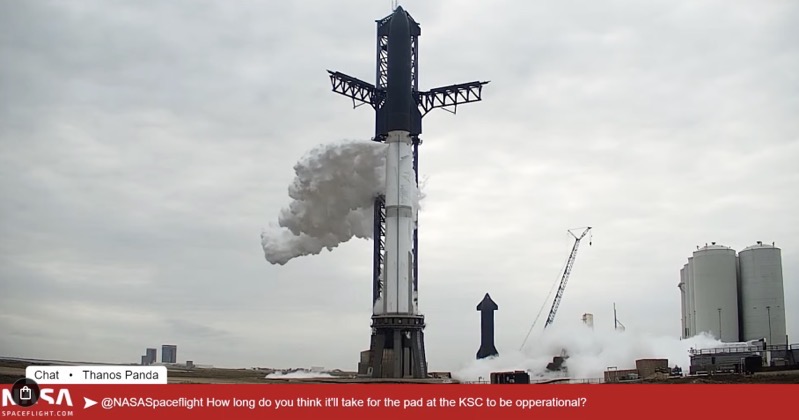 Some SpaceX Starlink subscribers are complaining of latency spikes and rampant packet loss on the service since earlier this week (via Reddit). The kind of lag this causes is most noticeable in online games, especially multiplayer titles. “I have been gaming on starlink for a while now and have for the most part not had […]
Nehal Malik
3 days ago