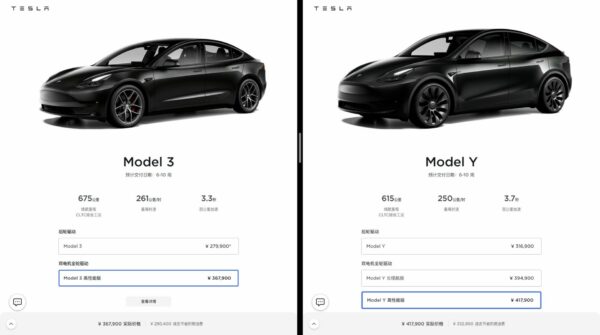 China is the world’s largest auto market, making it a key market for Tesla, and recent production upgrades have led the automaker to reduce wait times in a move to keep up with high demand.

Tesla has cut down estimated delivery times for its Model 3 and Y units in China, as reported by Reuters on Wednesday. New delivery times are estimated for a maximum of 14 weeks after some models previously predicted wait times of up to 20 weeks.

The Model 3 and Y units now have a delivery timeline of six to 10 weeks for most variants, as can be seen on Tesla’s website.

The news comes just a week after the base-level Tesla Model Y RWD dropped to wait times between one and four weeks, following the ramp-up of the company’s upgraded production lines which are set to boost output capacity by up to 30 percent.

Tesla also reduced Model Y delivery times a few weeks ago by as much as 50 percent, almost immediately after the upgrades had been completed.

Tesla has started rolling out its Model 3 Track Package in Europe, expanding the feature outside the U.S and Canada for the first time. As spotted by @Tesla_Adri in Germany, the Model 3 Track Package is priced at €5,990 ($5,589 USD). The package costs $5,500 in the U.S. and $7,200 in Canada. “Optimize the performance on […]
Sarah Lee-Jones
8 hours ago