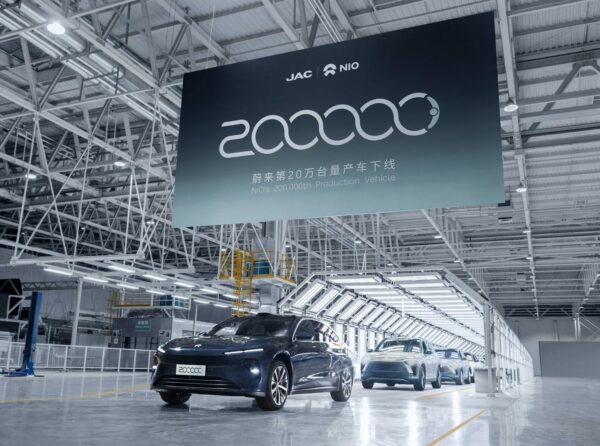 As China-based electric vehicle (EV) startup NIO continues to see its shares rise, the automaker is accelerating quickly to launch in new markets.

NIO’s first ET7 EVs are headed to Europe, and Deutsche Bank says the move shows the automaker’s plans to accelerate overseas market sales, according to CnEVPost.

The ET7 units were loaded onto a boat in China and are set to head to Germany, the Netherlands, Denmark, Sweden and Norway.

Additionally, CEO William Li is visiting the U.S., before holding an official launch event in Europe later this year — likely in September or early October.

In a collaborative research note, Deutsche Bank Analyst Edison Yu said, “With most investors laser focused on weekly/monthly sales in China, we take a break from that and provide a brief update on recent developments that show NIO pushing forward overseas which we think is an underappreciated aspect of NIO’s long term growth prospects.”

The team also detailed Li’s visit to the U.S., saying he was at NIO’s San Jose, California headquarters and was looking at potential locations for the first U.S. store in downtown San Francisco.

NIO is expected to launch in the U.S. in 2025, according to a rumor that surfaced on the internet earlier this month.

In July, NIO hit 10 million battery swaps cumulatively, averaging about one swap for every 28 seconds.

NIO announced today it has manufactured its 300,000th vehicle from its Second Advanced Manufacturing Base at NeoPark in Hefei, Anhui province, China, with the milestone taking place on Monday, December 12, 2022. The Chinese EV automaker manufactured its first vehicle in May 2018 and for 2022, it started delivering cars based on its second-gen platform known as […]
Sarah Lee-Jones
1 month ago