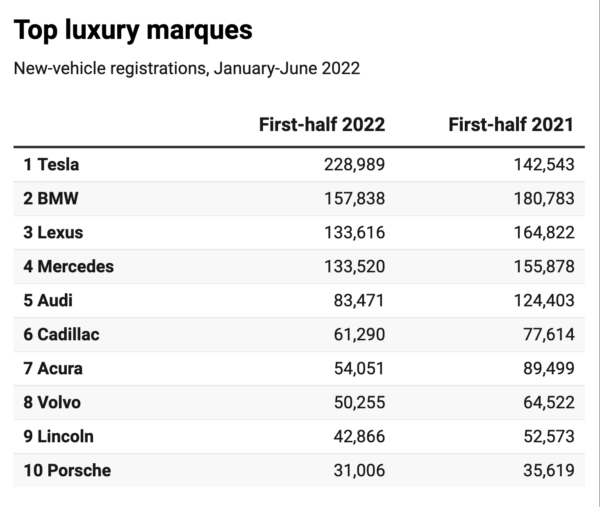 Tesla’s registrations jumped 61 percent in the first half of this year compared to last, beating out BMW and other gas automakers for the number one spot in luxury sales.

The news, as detailed in a report from Automotive News on Sunday, also showed rising competition in the electric vehicle (EV) space from legacy automakers, though Tesla still held a whopping 68 percent market share in the emerging industry through the first half of 2022.

AutoPacific Industry Analyst Robby DeGraff said, “Tesla’s growth is expected, but what’s more exciting to see is the fiery jump in sales for legacy automakers that have introduced new EVs onto the scene only recently.”

Data from Experian showed that traditional luxury automakers such as BMW saw a 13-percent drop from 2021 with just 157,838 vehicles registered, while Lexus fell 19 percent to just 133,616 units registered. Mercedes-Benz dropped by 14 percent in the year’s first half to just 133,520 registrations.

It’s worth pointing out Ford was able to double last year’s numbers in the first half, while Kia saw its registrations increase 600%, Hyundai at 150% and Polestar with an 800% jump in registrations.

Tesla’s production efforts are leading the industry despite an ongoing chip shortage and supply chain headwinds. 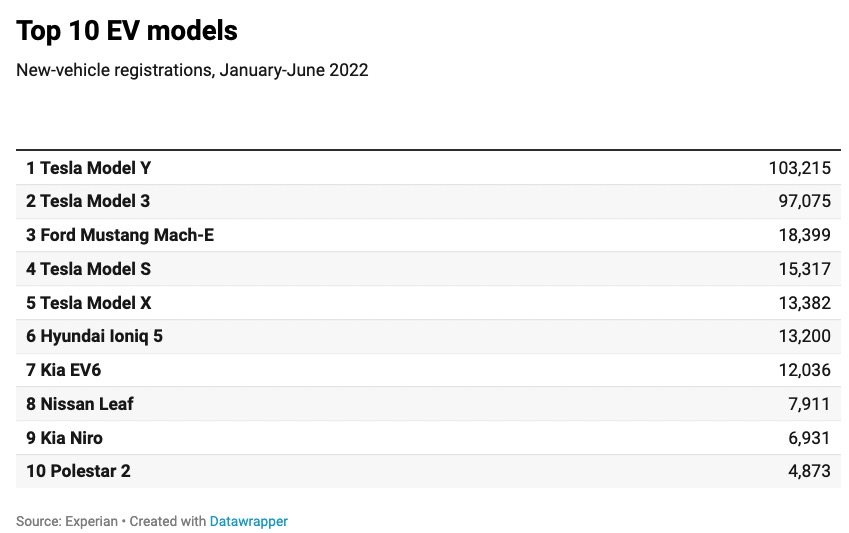 Tesla doesn’t publicize sales data, so onlookers use registrations as a rough estimate and comparison for other auto brands.

Only Tesla and Genesis avoided drops in registrations for the year’s first half, and the Elon Musk-led EV automaker is set to help its Model Y electric SUV become the world’s top-selling vehicle overall.