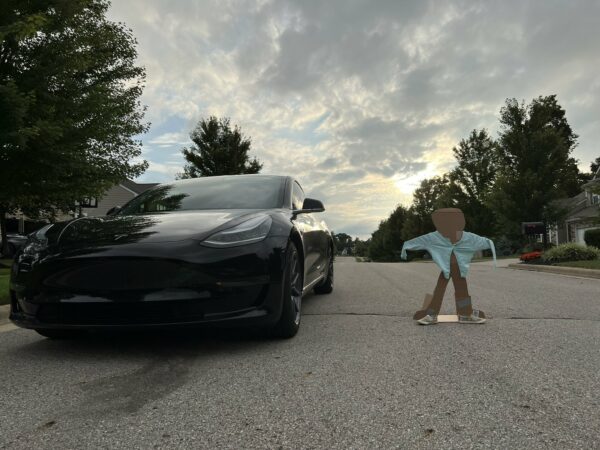 A Tesla Full Self-Driving (FSD) beta tester responded to claims that the system “mows down children” on Tuesday, sharing a test video showing the opposite.

@O’Dowd initially claimed in a campaign ad on Tuesday that Tesla’s Full Self-Driving  system would “indiscriminately mow down children.” O’Dowd’s attack included footage of a Tesla Model 3 repeatedly mowing down dummies of children on a test track, including a little crosshair that appeared to focus in on one of the dummies.

I just destroyed @RealDanODowd’s ad with a cardboard child – Not only did the @tesla visualize the child but it went around each time. The only real danger to children is Dan trying to stop this life-saving technology @elonmusk @WholeMarsBlog @kimpaquette @teslaownersSV #fsdbeta https://t.co/K7JUInXust pic.twitter.com/HzZkdE6xUT

In response, @TeslaDriver2022’s video showed the Tesla Model 3 slowing down significantly and driving around the cardboard child replica, showing that it didn’t have an issue avoiding it. Later in the thread, @TeslaDriver2022 also shared a streetside angle showing the encounter.

Destroyed @RealDanODowd PART 2:
1) Many asked the “child” be to the right more 2) In motion 3) Running into the street. I can’t get my @tesla to kill kids, that’s a good thing, but many seem disappointed🤷🏼‍♂️ @WholeMarsBlog @elonmusk @JohnnaCrider1 @28delayslater @chazman #FSDBeta https://t.co/5ufiPqcrgE pic.twitter.com/E2vmejiRe7

Additionally, @TeslaDriver2022 shared a part two to the video, in which he moved the dummy to be more in line with the driver’s right-side lane. Once again, the Tesla slows down and this time moves to the right to go around the cardboard child.

Tesla’s FSD beta 10.69 release is slated for August 20, according to CEO Elon Musk, and it’s expected to be a huge update.

As Tesla continues with plans to open its Superchargers to non-Tesla vehicles, the automaker plans to shift its charging rates and times at certain locations. Tesla is updating its charging rates at select Supercharger locations starting on Wednesday, September 28, according to tweet spotted by @Whole Mars Blog. In the screenshot, Tesla says that users […]
Peter McGuthrie
3 hours ago