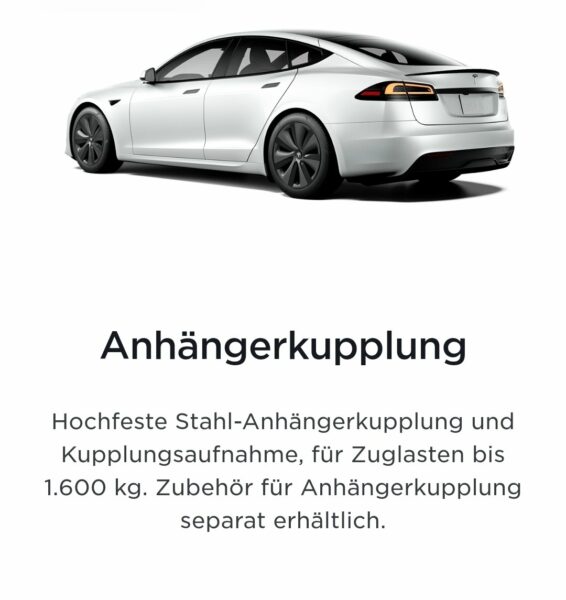 U.S. automaker Tesla periodically changes what’s available, and it has just made a tow hitch accessory available with its high-end premium electric sedan.

Tesla has made a tow hitch available with its Model S Plaid units in Europe, and possibly a long range all-wheel-drive version of the vehicle, as shown on the company’s order configurator page, according to @Tesla_Adri.

The Model S and Model X also are now available to order in Europe.

Model S Plaid (and possibly LR AWD) will be available with a tow hitch in Europe. pic.twitter.com/DfFhy2yhVn

In the description of the tow hitch, as translated from German, Tesla writes, “High-strength steel trailer coupling and coupling pocket, for towing loads of up to 1,600 kg. Tow hitch accessories sold separately.”

The Tesla Model S Plaid hit Europe last year, though the automaker’s Model Y and Model 3 are its best-selling vehicles on the continent.

Viewers have spotted several ship plans set to carry Tesla’s vehicles to Europe, hinting at the fact that Model 3 and Y exports from Giga Shanghai are expected to be huge in Q3.

Tesla also began selling the Model Y with a tow hitch in Norway in May, after launching the tow hitch Model Y across Europe in January.

In July, Tesla hit 800 Supercharger locations across 30 countries in Europe, with still more to come.

Well now we’re seeing more reports of the new larger rear screen in the Tesla Model S and Model X for 2023. After seeing pictures of this larger rear screen in Europe and China, we’re now seeing it for the first time in Canada, thanks to Tesla North reader Sam, who just took delivery of […]
Sarah Lee-Jones
15 hours ago

Image via Yan Chang Earlier this week it was reported the 2023 Tesla Model S and Model X was said to include a new larger rear display, as shared by a picture of a Model S in Europe. While it’s easy to assume all pictures on the internet are real, sometimes it’s worth taking things […]
Sarah Lee-Jones
16 hours ago