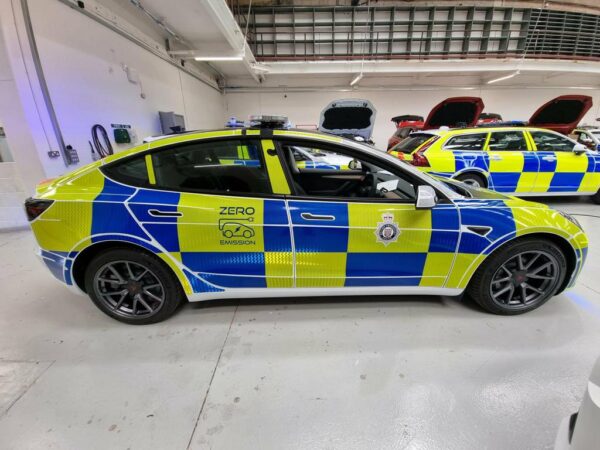 As the United Kingdom continued moving toward electric vehicles (EVs), the country’s police departments have also been trying out some new zero-emission options.

The British Transport Police (BTP) has taken delivery of a Tesla Model 3 and a Kia EV6, according to a post from BTP Chief Constable @Lucy D’Orsi earlier this month (via The Driven).

The BTP polices the network of railroads in the UK, and while these aren’t the first EVs to be used by police in the country, it is the first set of EVs for the BTP.

In June, the BTP took delivery of the Tesla Model 3 and the Kia EV in the first week of July, set to be deployed for patrol in the coming months.

Looking forward to seeing our first all electric car out on patrol @BTP pic.twitter.com/7DLjhtl917

Recently, Gloucestershire Police and Crime Commissioner Chris Nelson expressed concerns about the EVs’ ability to keep them charged while on patrol.

However, charge issues could be solved through fleet management and charging during off-peak times.

Police shared results from a Tesla Model 3 pilot program late last year, showing that the vehicle performed fairly well as a police cruiser — and it even was able to be charged while on shift.

Another Tesla Model 3 was delivered to Hampshire UK police earlier this year.

Tesla led EV brands in the UK in May, even despite the automaker’s Shanghai factory shutdown.

Tesla has changed its estimated delivery times on all models in China, with the order configurator page now saying all Model 3 and Y trims will be delivered in “December 2022” (via @Tslachan). Previously, each trim and model displayed one to five weeks for estimated delivery. The change comes as Tesla seemingly pivots to focus […]
Peter McGuthrie
11 hours ago

Long-term vehicle subscription service Autonomy has launched an end-of-year sale that lets users subscribe to a Tesla Model 3 for what it is calling the “lowest price anywhere” for the electric sedan. Customers need to put down a $3,000 deposit and then pay $450 per month for the first 12 months, said Autonomy earlier this […]
Peter McGuthrie
12 hours ago