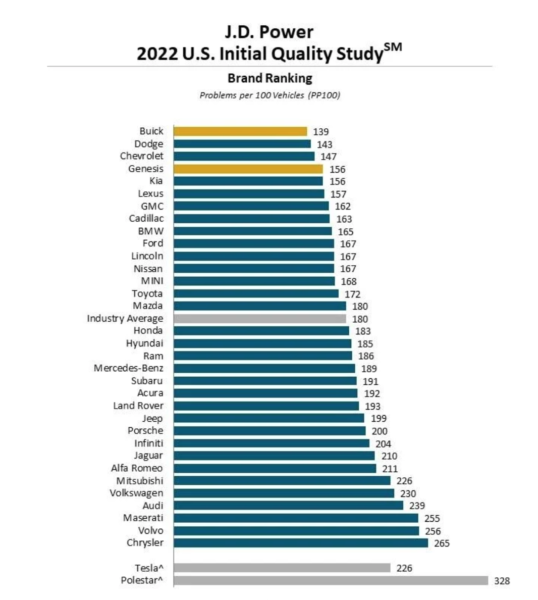 Initial vehicle quality declined in the late days of the COVID-19 pandemic, as detailed in the 2022 U.S. Initial Quality Study (IQS) shared by JD Power on Tuesday.

According to the report, the decline in vehicle quality has been caused by myriad factors, primarily including supply chain issues, record-high vehicle prices and personnel dislocations.

The study’s key findings include the fact that quality deterioration has been going beyond just launch vehicles, while mass-market vehicles experienced fewer issues than premium vehicles, and infotainment systems remained the most problematic area.

Additionally, the study found that battery-electric vehicles (BEVs) and plug-in hybrid vehicles (PHEVs) were found to be more problematic than gas vehicles and that issues with driving assistance systems have grown.

JD Power Director of Global Automotive David Amodeo said, “In general, initial quality has shown steady improvement throughout the history of this study, so the decline this year is disappointing—yet understandable. Automakers continue to launch vehicles that are more and more technologically complex in an era in which there have been many shortages of critical components to support them.”

The study is in its 36th year and is based on responses from 84,165 vehicle buyers this year on a 223-question inventory.

Tesla was officially included in the study for the first time, and the company’s cars scored a 226 PP100, while Buick’s cars ranked highest overall with a score of just 139 PP100.

While Tesla was included in the calculations, the press release also states that Tesla doesn’t allow JD Power access to certain owner information in states where permission is required by law, so the automaker is ineligible for awards.

Take a look at all of the new Tesla Superchargers that went live across the globe this past week, courtesy of data from Supercharge.info and the TMC Forums: Date Opened Location Number of Stalls Power Rating Official Listing September 26, 2022 2 Rua do Miradoiro, Vigo, Pontevedra, Spain 12 250 kW Tesla September 26, 2022 Strevelinsvej 13, […]
Nehal Malik
2 hours ago

As China celebrates its legal holiday of National Day this week, Tesla’s Gigafactory Shanghai will stay open with some added benefits for employees who work for the holiday. Tesla’s Giga Shanghai is remaining operational during China’s National Day holiday running from October 1 to 7, as reported by a source familiar with the matter reporting […]
Peter McGuthrie
11 hours ago

Tesla is looking to expand Gigafactory Nevada after years of announcing plans to do so, according to sources familiar with the matter reporting to electrek. Past statements by Tesla held that the Giga Nevada location would be able to produce around 105 GWh of battery cells per year and 150 GWh of battery packs per […]
Peter McGuthrie
12 hours ago