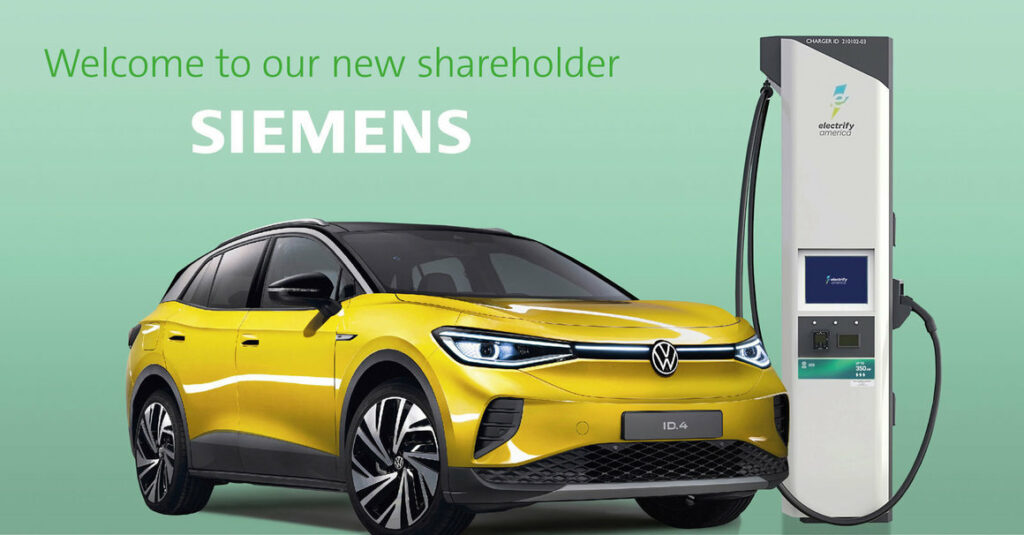 The news comes after we reported on Monday that the two parties were inching closer to a deal.

Electrify America now has a $2.45 billion post-money valuation for its charging network in North America, confirmed both companies.

The charging network plans to double its charging infrastructure to 1,800 locations and 10,000 fast chargers by 2026. Siemens’ investment “confirms our electrification strategy of making charging and energy solutions available nationwide – to customers of all EVs,” said Volkswagen.

Siemens already manufactures charging equipment for heavy-duty EVs and trucks in North Carolina. The company aims to produce over 1 million EV chargers for the U.S. automotive market over the next four years.

“Representing one of Siemens’ largest investments in electrified transportation, this strategic partnership with Electrify America aims to grow a collaborative ecosystem that propels EV adoption across the United States and Canada,” said Veronika Bienert, CEO, Siemens Financial Services, in a statement.

“Our unique ability to combine financial and technology know-how helps to fulfill Siemens’ commitment to decarbonize key industries, accelerate the shift to sustainable mobility, and do so in a way that’s accessible for all,” added Bienert.

Volkswagen established Electrify America in late 2016 with an investment of $2 billion. The move was part of a settlement following the carmaker’s admission to the “Dieselgate” emissions scandal.

As of March, Electrify America’s network comprises over 730 locations and more than 2,438 EV chargers.

Back in May, Electrify America also unveiled new public charger designs and plans for comfortable waiting areas at stations.

Demand for EV charging infrastructure in both the U.S. and Canada is on the rise amidst surging EV sales.

Earlier this month, the White House proposed new standards to help meet the Biden Administration’s goal of reaching 500,000 EV charging stations across the country by 2030. In Canada, the federal government has earmarked almost $880 million CAD to build around 65,000 new EV charging stations.