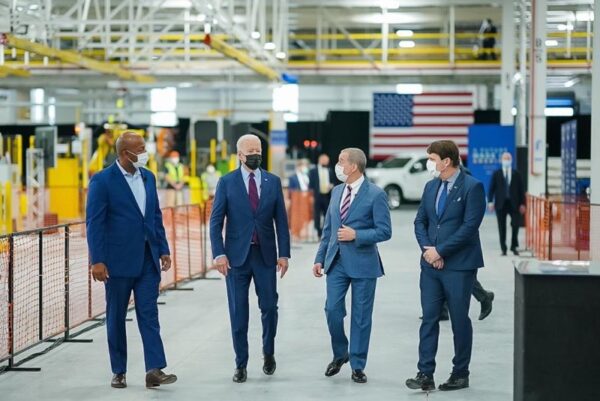 U.S. President Joe Biden has been known for his support of electric vehicles (EVs), and a new update is expected next week for the administration to detail its plans on expanding vehicle charging efforts.

The Biden administration plans to share a federal EV strategy outline on Monday and is expected to establish plans to deploy 500,000 EV charging stations across the U.S., according to NBC News.

In addition, $2.5 billion USD of the law is included to offer grants for those in remote locations and underserved communities to help support the expansion of EV charging stations.

Earlier this month, Biden signed an executive order requiring the U.S. to buy only EVs for its federal fleet by 2035, just weeks after Biden’s Build Back Better bill headed to Senate, including an updated EV tax credit of $12,500 USD for union-made EVs.

Biden’s administration has also been famously known for snubbing Tesla, a non-union company, despite the company’s many moves to spur on mainstream adoption of EVs.

The U.S. plans to spend $7.5 billion to build 500,000 EV chargers, while also another $65 billion to upgrade the country’s electric grid. These funds are from the $1 trillion infrastructure bill signed back in November.

States will get $5 billion from the $7.5 billion for building charging networks, while $2.5 billion will be aimed at local grants for rural areas and lower-income communities to build EV chargers.

Also coming is a Joint Office of Energy and Transportation to “ensure the agencies can work together to implement the EV charging network and other electrification provisions in the Bipartisan Infrastructure Law.”

“The auto industry is clearly moving toward electric. We need to make the shift faster and make sure it is driven by the United States,” said Vice President Kamala Harris at today’s announcement (via Automotive News). “That means manufacturing millions of electric cars, trucks and buses right here in our country. That means outfitting thousands of EV … repair garages, just like this one, and it means installing a national network of EV chargers.”