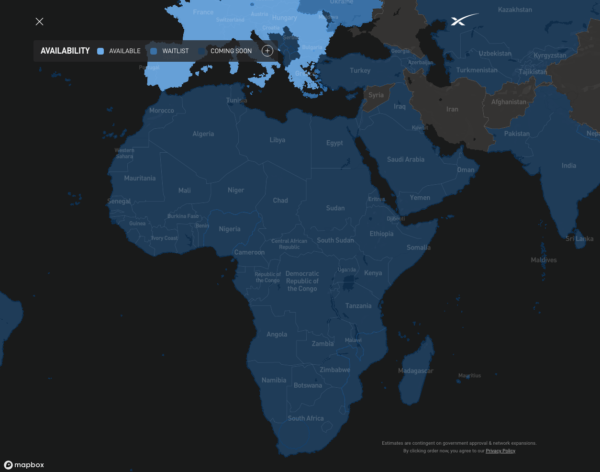 After SpaceX made an RV-friendly Starlink terminal, the company’s head is saying an entry into Africa is imminent.

SpaceX head @Elon Musk said the first countries in Africa to receive Starlink satellite internet would be announced soon, as stated in a tweet on Monday.

The statement came in response to a user asking if SpaceX had any plans for Starlink in Africa, to which Musk said, “Yes, first countries in Africa to be announced coming soon.”

Yes, first countries in Africa to be announced coming soon.

Starlink will serve everywhere on Earth that we’re legally allowed to serve.

In the tweet, Musk also added that “Starlink will serve everywhere on Earth that we’re legally allowed to serve.”

When viewing SpaceX’s availability map, the entire continent of Africa is highlighted in dark blue to signify that it’s waitlisted.

If you scroll over Africa with the mouse, it displays a message saying “Starting in 2023.”

Musk was in Brazil over the weekend to help the country launch Starlink, and to continue government talks about the future of the service in the country.

In addition to launching a pay-as-you-go RV service plan, SpaceX has chosen JSX to become the first air carrier to use Starlink internet for inflight Wi-Fi.

SpaceX and NASA signed a Space Act Agreement dated September 22 to study the Hubble Telescope for a potential reboot mission, as detailed in an announcement on Thursday. The idea would potentially boost the Hubble Telescope to orbit at a higher altitude using SpaceX’s Dragon spacecraft for no extra cost to the government. The plans […]
Peter McGuthrie
20 hours ago