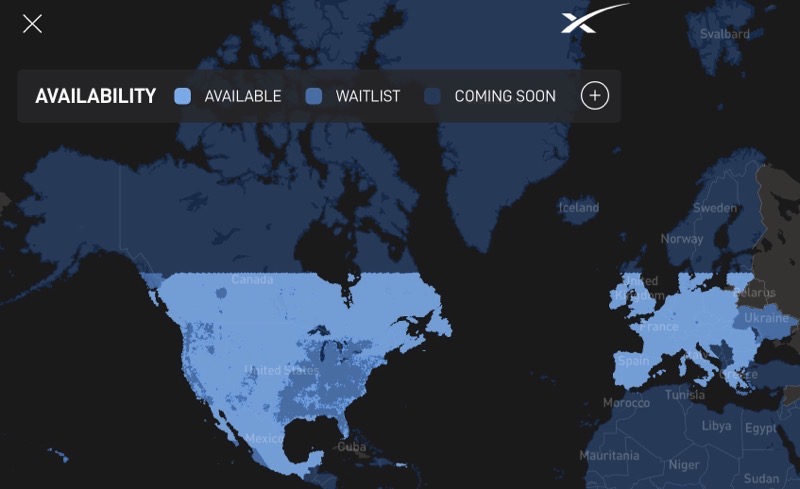 In late March, SpaceX debuted a Starlink internet availability map, showing which regions of the world had access to the satellite internet immediately and those that had to be on a waitlist.

Fast forward to today, SpaceX has updated the Starlink map to now improved availability by region, showing areas where the internet is “available”, “waitlist” and “coming soon”.

SpaceX also announced Starlink is now available in 32 countries around the world.

The next Starlink launch is set for Friday, May 13 at 3:07pm PDT, from Vandenberg Space Force Base in California, where SpaceX’s Falcon 9 rocket will send a batch of 53 satellites into lower Earth orbit.

A second Starlink launch, back-to-back, will take place on Saturday, May 14 at 1:38pm PDT from Cape Canaveral, Florida.

Starlink is garnering more users than ever before with its recent service expansions, but speeds could be decreasing across the board with added use for users of SpaceX’s satellite internet service. SpaceX’s Starlink satellite internet speeds dropped slightly in the third quarter of the year, as shared on Wednesday with data compiled by Ookla‘s speed […]
Peter McGuthrie
7 hours ago

SpaceX is raising prices for Starlink internet in Ukraine, following struggles to lock down continued funding for the country’s satellite internet hardware and services, according to a report from PC Mag, citing user reports from Ukraine. The news came in email form for many users of the internet service, with SpaceX alerting customers that it […]
Peter McGuthrie
8 hours ago

After SpaceX unveiled its Starlink RV mobile internet service earlier this year, one customer of the company is showing off the contents of the order. SpaceX’s Starlink RV internet kit was spotted being unboxed on Monday, showing the next-generation terminal as it comes from the company (via Reddit). The photo shows the RV kit sitting […]
Peter McGuthrie
1 day ago