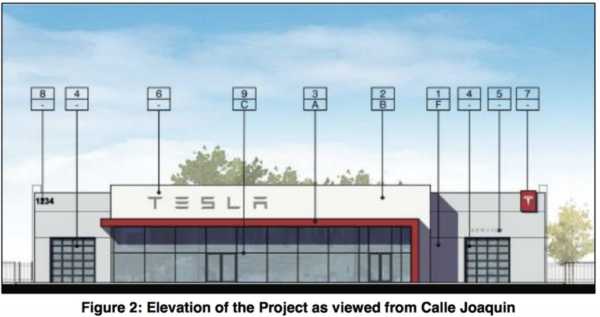 As Tesla continues to expand its retail presence for its customers, construction on a new California showroom is expected to begin in the coming months for the automaker.

Tesla is planning to open a new store and service center in San Luis Obispo, California, after the project was given the green light earlier this week, according to The Tribune (via @Sawyer Merritt).

The Tesla store and service center is set to be 31,000 square feet, sitting on around 2.8 acres of vacant land on the city’s Calle Joaquin.

The showroom and service center is part of a larger wave of new retail stores deployed by Tesla, one of which is set to open in Budapest, Hungary soon.

Tesla is also constructing its largest Supercharger station yet in California, with the upcoming site in Barstow, California set to boast 100 individual charging stalls.

In this year’s first quarter, Tesla’s Model Y and Model 3 outsold both the Honda Civic and the Toyota RAV4 in California. The Model Y was the best-selling vehicle of any kind in the state.

Tesla also increased pricing in California for its Supercharging services earlier this month, simultaneously bumping up the price by 20 percent in the state and a few other locations.

Tesla has also planned to move away from showrooms as of a report last year, though the automaker is still putting a lot of stock into its retail locations.

In a recently published YouTube video, Brad Sloan gives us a high-fidelity aerial tour of Tesla’s Gigafactory in Austin, Texas, on the morning of Friday, November 25. While most of the workers had the day off for Thanksgiving, some contractors can still be spotted on the site. A fair amount of ready-to-deliver Model Y units […]
Nehal Malik
3 hours ago