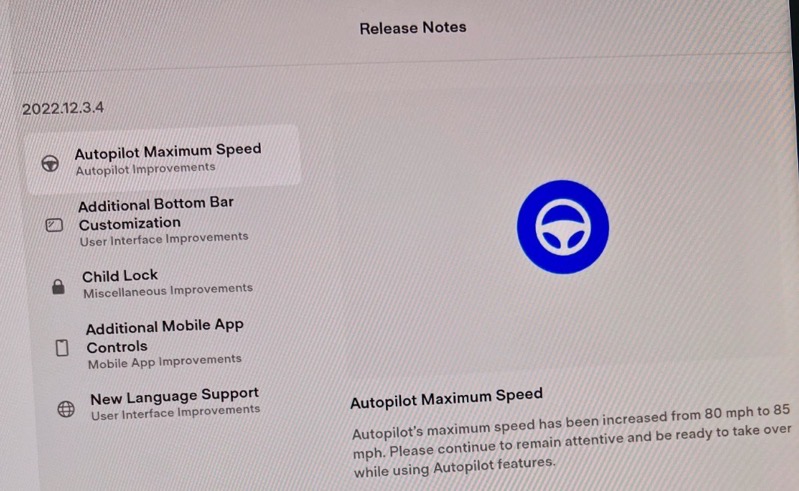 Tesla started rolling out its 2022.12.3.4 software update on Tuesday afternoon according to @Teslascope, and with it, includes a change to increase Autopilot maximum speed for Tesla Vision vehicles, which was reported on yesterday.

According to 2022.12.3.4 release notes shared by @zachgilbert, the addition of “Autopilot Maximum Speed” details “Autopilot’s maximum speed has increased from 130 km/h to 140 km/h. Please continue to remain attentive and be ready to take over while using Autopilot features.”

For those in the U.S., the Autopilot maximum speed increases from 80 mph to 85 mph, according to a screenshot shared on Reddit, confirming Tesla’s website changes on the matter.

Tesla Vision Autopilot relies solely on cameras and does not use radar. Tesla Vision debuted on the Model 3 and Model Y starting in May 2021 and the newest Model S and Model X cars produced in North America since mid-February 2022.

It’s unclear if 2022.12.3.4 fixes the Dashcam bug that requires owners to keep formatting their USB sticks or removing and re-inserting them.

Now, if and when Tesla allows an Autopilot maximum speed of 88 mph, that’s when we can go ‘back to the future’, right?