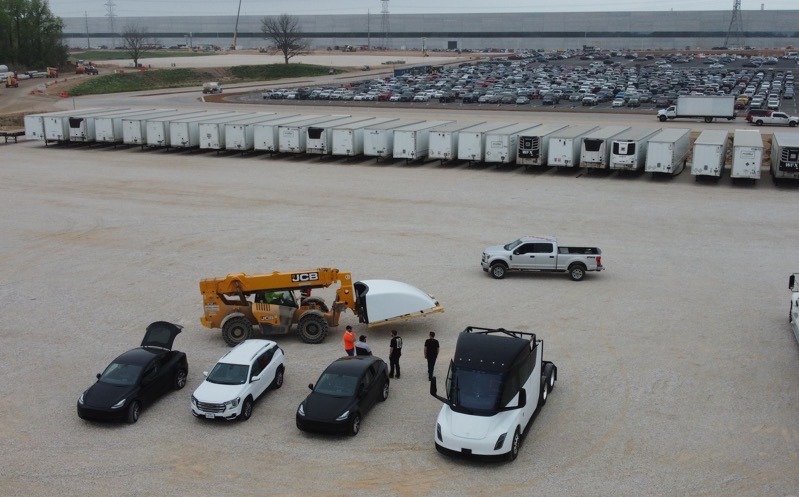 Tesla continues to prep Giga Texas for its Cyber Rodeo grand opening event set for April 7, 2022. We saw some images of the site on Sunday, but now we have fresh teasers from Monday morning.

According to new images shared on Monday by drone pilot Joe Tegtmeyer, we see preparations are moving along. Tesla’s Semi has appeared on site in white, while Tesla has parked white Model Y cars in a star formation (we get a better look from Joe here).

A few more images from an incredibly busy Giga Texas on this 4 April 2022 morning. A few clouds didn't affect any of the Cyber Rodeo preparations, which were everywhere! See more in my video out later today! @JoeTegtmeyer pic.twitter.com/NR27pLotQl

Tesla Semi arrives at Giga Texas … here are a few more photos as it arrived and gets set up! Can't wait to see this in person during Cyber Rodeo! See a lot more around the site today (4 April 2022) in my video out later today! @JoeTegtmeyer pic.twitter.com/J9s5lNoBet

The Cyber Rodeo prep includes a huge stage being set up on the west side of the factory, landscaping and plants being laid down and many more Model Y vehicles parked outside.

Tegtmeyer also shares some better images of the Model Y rear cargo shelf we told you about yesterday:

Model Y from Giga Texas appears to have rear package shelf. Check out these photos and see for yourself! So much around the site today, 4 April 2022, so see more in my video out later today! @JoeTegtmeyer pic.twitter.com/FYTmRpsGGm

Tesla is gearing up for the grand opening of a new two-storey sales center at Ole Rømers Vej 11 in Ribe, Denmark on Saturday, November 26 (via @TSLA_Ownrs_DK).  Grand Opening of @Tesla’s new two-storey center in Ribe, Denmark on saturday, November 26 at 11 am at Ole Rømers Vej 11 🇩🇰⚡️ Come by and test […]
Nehal Malik
7 hours ago