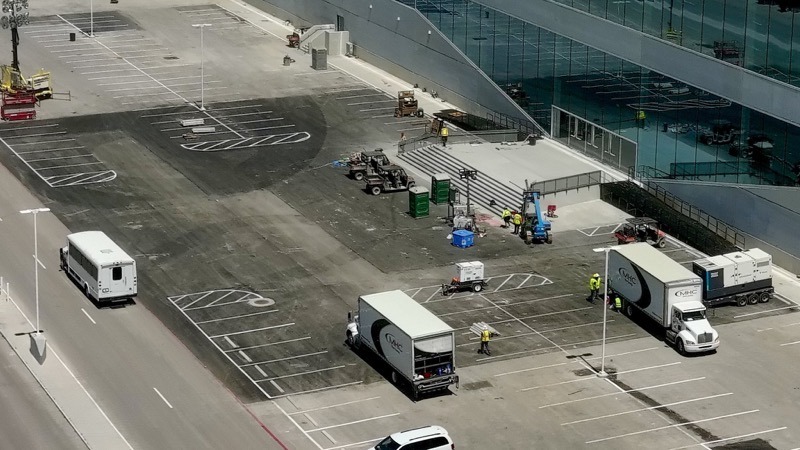 According to drone pilot Jeff Roberts, Tesla has started preparing its Gigafactory Texas site for the upcoming ‘Cyber Rodeo’ grand opening event, set for this week.

“Giga Texas preparing for a big event to come on this beautiful Sunday! Images from just a few moments ago!”, said Roberts.

Roberts shared images taken on Sunday, showing cargo trucks on-site unloading equipment at the main entrance of the Gigafactory in Austin, Texas. We see temporary wheelchair access ramps set up on both sides of the main entrance.

The Cole Gordon The Helping Hand Foundation is also seen on site helping with set up, it appears.

Giga Texas preparing for a big event to come on this beautiful Sunday! Images from just a few moments ago! #Tesla #GigaTexas #CyberRodeo pic.twitter.com/Y4WfFMYWXk

Yesterday, video from Roberts showed a new batch of red Tesla Model Y vehicles being produced and parked on site.

On Saturday, Tesla CEO Elon Musk said, “this might be gearing up to be literally the biggest party on Earth,” referring to the ‘Cyber Rodeo’ party, which has a permit for up to 15,000 people in attendance.

Update: Check out Roberts’ video down below of the Giga Texas setup for Cyber Rodeo:

Tesla’s brand retains customers better than other automakers, and it tends to steal customers from other brands, according to new data shared by S&P Global Mobility last week (via @Umbisam). The data measures a 12-month period leading up to July 2022, looking at how drivers purchased — whether switching to a new brand, or remaining loyal […]
Peter McGuthrie
6 hours ago

Tesla is offering a new discount that could slash prices even further for previous brand owners, with a new trade-in deal available for new Model S and X vehicles. U.S. buyers of the Model S and X who trade in an old Tesla vehicle are now eligible to receive $3,000 off the price tag or […]
Peter McGuthrie
7 hours ago

Tesla has made a Twitter account for its Megapack commercial battery packs, showing as @Tesla_Megapack, and in the bio it says “large-scale energy storage,” as first spotted by @SawyerMerritt (via @Tslachan). At the time of writing, the account has yet to make any posts, has about 1,390 followers and only follows three other accounts: SpaceX, […]
Peter McGuthrie
7 hours ago