Hertz to Buy up to 65,000 Polestar Electric Vehicles 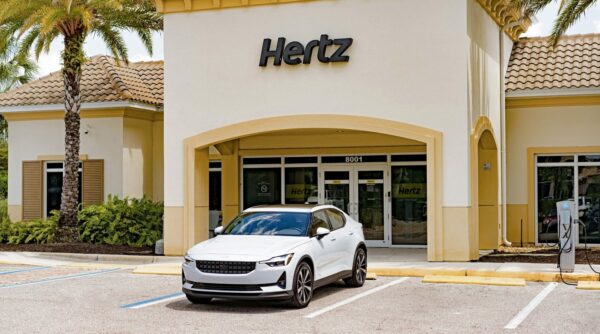 After Hertz announced plans to purchase Tesla Model 3 units to lead electric vehicle (EV) adoption in the rental space last year, the company has shared a new partnership with a fellow EV automaker.

Hertz has announced a strategic partnership with Polestar, with the rental company ordering the Polestar 2 for both its rental and ride-sharing programs, according to a press release.

Availability for the Polestar 2 through Hertz is expected to start this spring in Europe and near the end of 2022 in North America and Australia.

Hertz CEO Stephen Scherr said, “Today’s partnership with Polestar further builds on our ambition to become a leading participant in the modern mobility ecosystem and doing so as an environmentally-forward company.”

Scherr continued, “By working with EV industry leaders like Polestar, we can help accelerate the adoption of electrification while providing renters, corporate customers and rideshare partners a premium EV product, exceptional experience and lower carbon footprint.”

Upon adding the Model 3, Hertz said it was already seeing “strong early demand” back in November — just after it had begun deploying the EV.

Polestar recently began delivering single-motor variants of the Polestar 2 in the U.S., just weeks after announcing the Polestar O2 convertible electric roadster. It remains to be seen if Polestar is able to meet production demand for its electric vehicles, amid the ongoing chip shortage and supply chain issues.

Another state is targeting a major shift to electric vehicles (EVs) by the mid-2030s, following California’s mandate on going emission-free. New York Governor Kathy Hochul (D) said on Thursday that the state will need to shift to selling only zero-emission vehicles by 2035, as reported by The Hill. “We’re really putting our foot down on […]
Peter McGuthrie
25 mins ago

Canada Infrastructrure Bank (CIB) has launched an investment of $500 million into EV charging and hydrogen refueling in a new initiative focused on infrastructure, as detailed in a press release on Thursday. The Charging and Hydrogen Refuelling Infrastructure Initiative (CHRI) is aiming to decrease greenhouse gases in the transportation sector by increasing the availability of […]
Peter McGuthrie
45 mins ago

BC Hydro, the utility for British Columbia, Canada, sent an update to customers on Thursday detailing the latest electric vehicle charging station updates. As for new sites, BC Hydro says, “we recently completed two new sites: Duncan (up to 100kW charging) and McLeod Lake. Next up is a station currently under construction in Kitimat.” Existing site updates include […]
Sarah Lee-Jones
1 hour ago