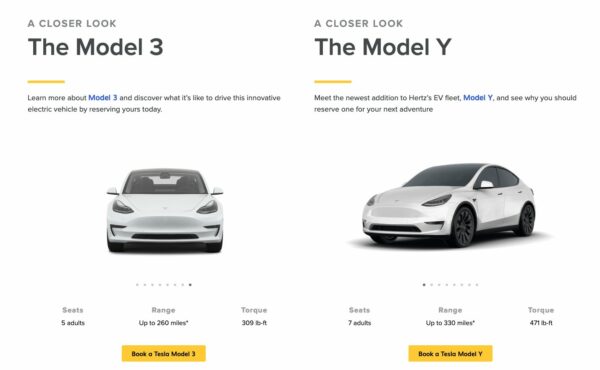 Rental vehicle company Hertz is beginning to add electric vehicles (EVs) to its fleet, with a new listing on its website showing that the company is ready to expand its EV offerings.

Hertz now plans to add thousands of Tesla Model Y units to its rental fleet, according to the company’s website (via @SawyerMerritt).

While Hertz is already letting users book a Tesla Model Y, it’s not yet clear if any copies of the vehicle are available.

BREKAING: @Hertz has confirmed that the Tesla Model Y is the newest addition to Hertz’s EV fleet.

Hertz is expected to buy many thousands of Model Y. pic.twitter.com/QumyGeDmG9

On the website, Hertz writes, “Our newest EV, the Tesla Model Y, has up to 330-mile range and provides a spacious, comfortable ride for up to 7 total passengers, no matter the distance. Other hallmark features of Model Y include its elevated design, cutting-edge technology, torque power and safety intelligence, making it the best-selling EV in the world.”

Hertz made headlines last year when it announced plans to purchase a fleet of Tesla Model 3 units, with the company expecting to purchase 100,000 total in a deal valued at $4.2 billion.

Tesla Model 3 rentals through Hertz began on November 1 last year, with the company’s CEO Mark Fields saying the purchase could even increase to 150,000 units.

Using the deal, Fields also said Hertz hoped to lead EV adoption, with the addition of the Model Y SUV set to help with that goal.