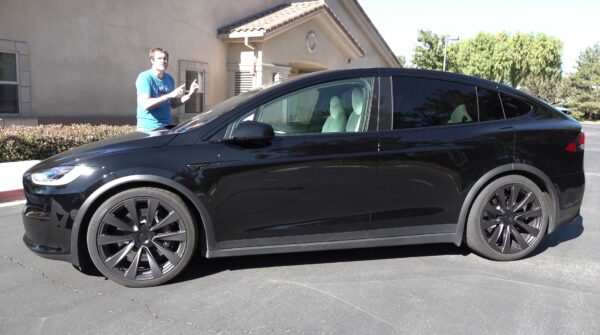 A new review of the latest Tesla Model X Plaid was shared by Doug DeMuro on Thursday, showing off the vehicle’s features and culminating in a driving test.

DeMuro dives right into talking about the vehicle’s features, starting with the inclusion of a backup key card for users who misplace their key — which is shaped like the Model X itself.

DeMuro also talks about multiple elements of the experience sitting in the vehicle’s driver and passenger seats, including the yoke steering wheel and its capacitive touch buttons.

After about 30 minutes of discussing the Model X Plaid’s interior and exterior features, DeMuro takes it for a drive, doubling down on his thoughts that the steering yoke isn’t that bad and just takes some getting used to.

After a few sprint launches in the vehicle, DeMuro goes on to call the vehicle “insanely fast,” saying that it loses some points for being a little tough to handle on sharp turns.

You can see the full 37-minute review of the Model X Plaid from Doug DeMuro below.