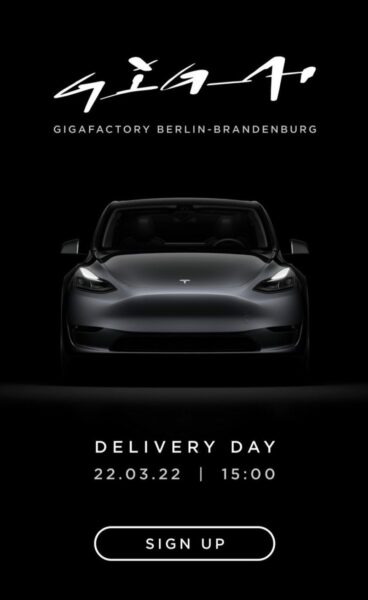 The long-awaited Tesla factory in Grünheide, Germany is officially set to begin delivering its first vehicles, as seen by invites sent out by the company.

Tesla is sending out employee invites to a Delivery Day event on March 22 at Gigafactory Berlin-Brandenburg, set to mark the first European-made deliveries from Tesla, according to a screenshot of the invitation shared by @SawyerMerritt.

The invite shows the date March 22, in addition to the time 15:00, when the event is expected to begin.

The Berlin-Brandenburg Gigafactory was granted approval to begin production last week after pressure from regulatory and environmental groups caused multi-year delays to the factory’s opening.

BREAKING: Tesla is officially sending out invites to Berlin employees for Delivery Day at Gigafactory
Berlin-Brandenburg on March 22 – Source

Tesla’s Giga Berlin is expected to ramp up production to 1,000 vehicles weekly by April, just ahead of the automaker’s opening of the new Austin, Texas Gigafactory in the U.S.

Tesla’s Gigafactory Texas is also set to hold an opening event on April 7 at 4:00 p.m.

With the opening of Gigafactory Berlin, Tesla’s Shanghai Gigafactory will be even more freed up to focus on high demand in China and other countries the Chinese factory exports to.

SEC to Finally Pay Out $40 Million from 2018 Tesla Settlement, After Musk Criticism