In his State of the Union Address, President Joe Biden mentioned that American manufacturers like Ford and General Motors are investing large amounts of money into building electric vehicles. These figures were shared via the President’s official Twitter account, which got Elon Musk’s attention.

The tweet mentions that Ford is investing $11B, while GM will make its largest investment yet, with $7B, creating a total of 15,000 jobs in the process.

The Tesla CEO responded to this tweet with details on how his company has invested and created more opportunities than both companies combined.

“Tesla has created over 50,000 US jobs building electric vehicles & is investing more than double GM + Ford combined.”, said Musk, tossing in “fyi too the person controlling this Twitter account.” 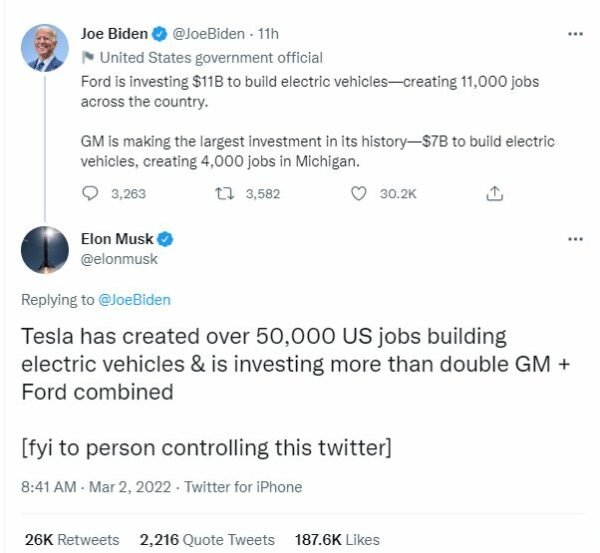 This isn’t the first time that the tech CEO has called out the President for ignoring Tesla. The White House did not invite him to a meeting with auto industry CEOs in the past.

Biden also left the company out of his ‘Build Back Better’ plan and locked Tesla out of the total $12,500 tax credit offered for EV purchases. Both these incidents were immediately criticized by Elon Musk on Twitter.

As of late, the White House has recognized Tesla and Elon Musk, but it took protest and a petition for Biden to acknowledge the automaker, instead of just praising legacy automakers such as GM and their union labor.

Tesla has changed its estimated delivery times on all models in China, with the order configurator page now saying all Model 3 and Y trims will be delivered in “December 2022” (via @Tslachan). Previously, each trim and model displayed one to five weeks for estimated delivery. The change comes as Tesla seemingly pivots to focus […]
Peter McGuthrie
8 hours ago

Long-term vehicle subscription service Autonomy has launched an end-of-year sale that lets users subscribe to a Tesla Model 3 for what it is calling the “lowest price anywhere” for the electric sedan. Customers need to put down a $3,000 deposit and then pay $450 per month for the first 12 months, said Autonomy earlier this […]
Peter McGuthrie
9 hours ago