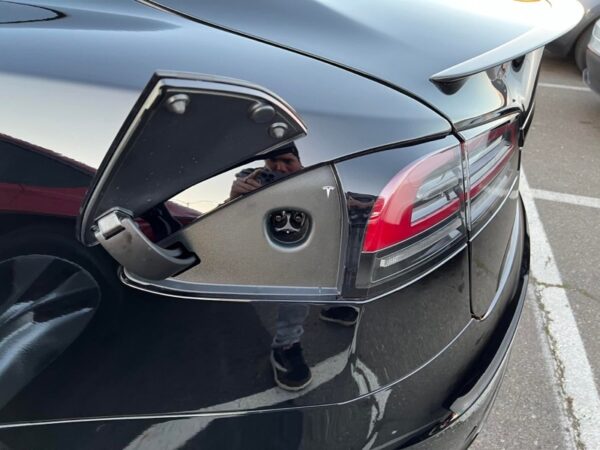 After sharing a video showcasing the new headlights and taillights on his new 2022 Tesla Model S Plaid (the refresh of a refresh?!), @JacobIsAMac has now detailed the new charge port door on his electric sedan.

The new charge port flip opens from a hinge in the bottom left corner, opening in two stages, like we’ve seen previously on the Model X Plaid refresh in Taiwan. The extra space around the charge port will allow for a CCS2 port, instead of Tesla’s proprietary port.

The old charge port on Tesla’s legacy Model S saw the flap open on a hinge on the right, swinging open like a door.

The charge port itself now has a design like the Model 3 and Model Y, losing the LED light ring as seen in the previous generation. Instead, we have a lit-up Tesla logo to indicate charge status.

Jacob’s Model S Plaid with new headlights, taillights and charge port, is apparently one of the first to be delivered in the United States, picked up from Tesla’s factory in Fremont, California.