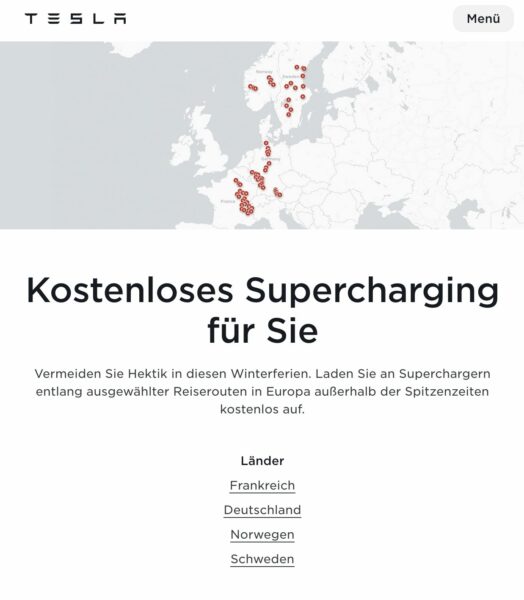 As many countries in Europe prepare for the winter holidays, Tesla is celebrating by offering free charging at its electric vehicle (EV) charging network in four countries across the continent.

Tesla is offering free holiday Supercharging throughout Germany, France, Sweden and Norway for off-peak hours users, according to a page on Tesla’s website (via @Tesla_Adri).

Off-peak hours timing varies from country to country, but Tesla lists the Supercharger locations as well as the details on what days and times off-peak hours are in each country.

Tesla Gigafactory Berlin’s First Cars Will Be Made with 2170 Cells https://t.co/CnGSbZvXLD

In France, the charging applies from February 11 to February 27, with off-peak hours consisting of before 10 a.m. and after 6 p.m.

Germany’s Supercharging runs from February 18 to March 6, and off-peak hours are prior to 8 a.m. or after 7 p.m.

Norway’s Supercharging timeline also goes from February 18 to March 6, with off-peak hours ending at 12 p.m. and starting after 7 p.m.

Sweden’s free Supercharging also runs from February 18 to March 6, with off-peak hours before 11 a.m. or after 6 p.m.

The news comes just weeks after Tesla expanded support for non-Tesla vehicles to charge at Superchargers in both France and Norway.

The company had already begun supporting a pilot for the feature in the Netherlands just months ago.

Tesla also offered free Supercharging in December at locations across the U.S. to celebrate the holidays.