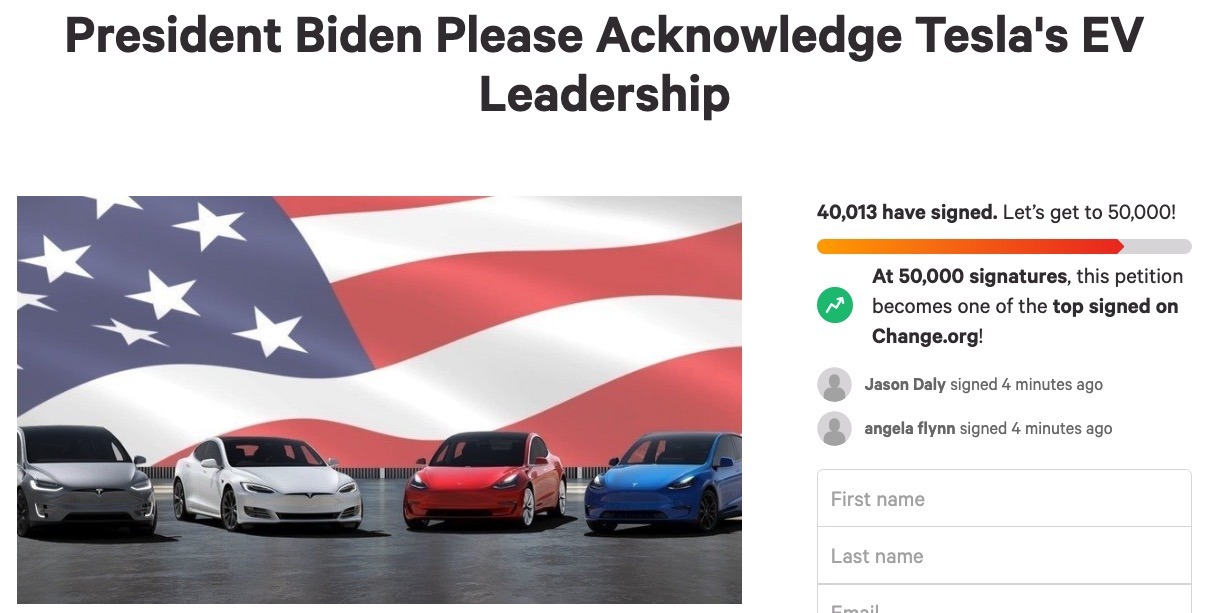 After the White House failed to invite Tesla CEO Elon Musk to a meeting with auto industry CEOs and other business leaders last week, a petition was started to get President Biden to give credit where credit is due.

Following the meeting, Biden shared a video on social media where he stood beside General Motors CEO Mary Barra and heralded the legacy carmaker as a leader in domestic electric vehicle (EV) manufacturing.

This was not the first time President Biden snubbed the EV pioneer — his Build Back Better plan locks Tesla out of the full $12,500 USD in tax credit offered for EV purchases, and he has repeatedly refrained from acknowledging Tesla’s contributions and efforts in the EV space.

“The White House and the Biden Administration have intentionally been trying to ignore Tesla’s hard work while propping up GM and others as ‘EV Leaders,'” says the petition. “This is an insult to the Americans who work for Tesla.”

Tesla delivered a record 936,222 electric cars last year, up 87% from 2020. While both General Motors and Ford are accelerating EV efforts, neither even comes close to matching Tesla’s current production capacity.

At the time of writing, the petition has been signed by 40,013 people (and counting). It’s unclear if President Biden will ever respond and acknowledge Elon Musk and company.

Tesla’s Gigafactory Texas is reportedly aiming for 75,000 units of the Model Y in the first quarter of 2023, according to an unnamed source who shared the information with electrek. The figure equates to more than 5,000 units per week at the site for the entire quarter, marking a significant production increase from the 1,000 […]
Peter McGuthrie
14 hours ago

Although Tesla currently remains the top electric vehicle (EV) manufacturer in the U.S., a new study shows that increasing competition is slowly chipping away at the company’s market share. Tesla has a 65 percent EV market share in the U.S. in the first nine months of 2022, which is down from 79 percent in 2020, […]
Peter McGuthrie
15 hours ago