Chinese automaker NIO recently placed an advertisement in the German newspaper, Automobilwoche, to congratulate the latter for its 20th anniversary.

The NIO ad says, “Hello World”, and congratulates the newspaper, with a line translated at the bottom that says, “we’re almost there,” suggesting a launch in Germany is coming soon. Pictured in the ad is NIO’s ET7 electric sedan, as shared by @investorinstonk: 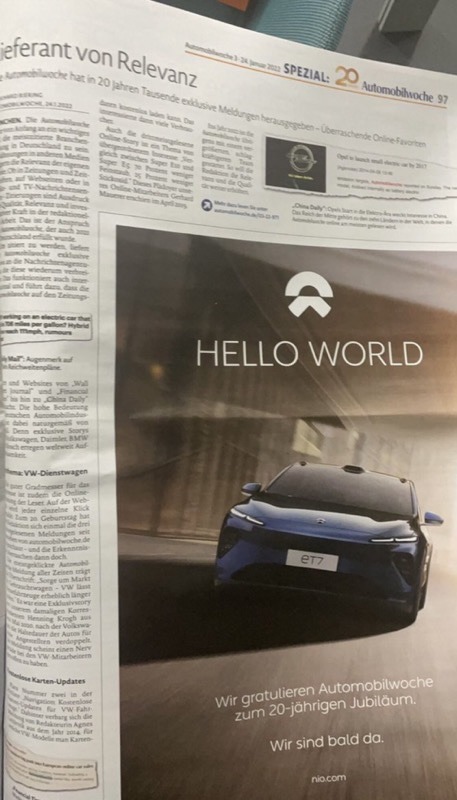 Back in December, NIO CEO William Li said at the company’s NIO Day 2021 event, it would soon launch in Denmark, Germany, Sweden and the Netherlands in 2022, as part of further expansion in Europe beyond Norway.

On the weekend, it was reported NIO had joined the Danish Car Importers association, hinting at a launch soon.

The ET7 sedan offers up to 1,000 km range (with 150 kWh battery and NEDC range estimates) with its 0.208 drag coefficient, and has a simple interior with a 12.8-inch AMOLED center display. The vehicle has a glass roof and its sound system contains 23 speakers with Dolby Atmos as standard. Performance is slated at 0-62mph in 3.9 seconds.

The NIO ET7 was first announced back in January 2021 and is of course part of the company’s Power Swap battery stations.