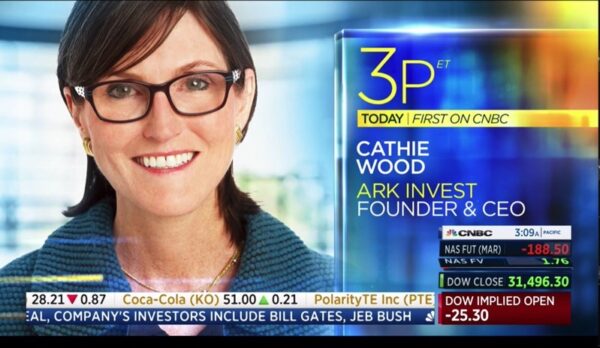 Tesla’s shares are reaching their lowest price in months, which bullish investors are using as an opportunity to scoop up more of the automaker’s stock.

Cathie Wood’s Ark Invest purchased 33,482 new shares of Tesla on Thursday, amidst a share price slump that saw the stock as low as $829.10, according to Reuters.

The purchase was split between the firm’s ARK Innovation ETF and ARK Next Generation Internet ETF funds, following the automaker’s lowest close in a few months.

In August, Ark Invest trimmed its Tesla holdings, though the company remains the firm’s top share held, despite its weight in the stock dropping from 11.2 percent to 8 percent in the fall.

Ark Innovation’s other top holdings include Roku, Teladoc Health and Zoom Video, though they have slumped overall from 75 to 63 percent in the past year.

The investing firm and Wood also put forward a $3,000 price target on Tesla last year, which they expect to be accomplished by 2025.

In the past, Wood has also suggested that Tesla could wield up to 20 or 25 percent of the automotive market share within five years.

Earlier this week, the National Bank of Canada also purchased $600 million worth of Tesla shares, in addition to buying $20 million shares of NIO.

Long-term vehicle subscription service Autonomy has launched an end-of-year sale that lets users subscribe to a Tesla Model 3 for what it is calling the “lowest price anywhere” for the electric sedan. Customers need to put down a $3,000 deposit and then pay $450 per month for the first 12 months, said Autonomy earlier this […]
Peter McGuthrie
18 hours ago