ARK Invest has released its latest research and price target for Tesla in 2025 on Friday, as shared by Tasha Keeney, CFA, Analyst, for the investment firm:

The forecast price target has been pushed forward one year to 2025 instead of 2024, while it also includes Tesla’s insurance business, but does not take into account the company’s energy storage or solar business, nor bitcoin assumptions.

Our belief is that the energy business is most usefully thought of as a capital-efficient mechanism to keep battery production maximally utilized (which would be difficult against more cyclical vehicle production alone).

We reserve the right to change our minds.

“To arrive at this forecast, ARK used a Monte Carlo model with 34 inputs, the high and low forecasts incorporating 40,000 possible simulations. Our bull and bear price targets are the top and bottom quartile outcomes from the simulations, as shown below,” says the report.

Check out the chart below:

According to ARK, they provide bear case and bull case scenarios for Tesla for 2025. The investment firm believes Tesla could sell 5 million cars in 2025, or 10 million in its bull case. Tesla would be generating $234 billion on the bear case, or $367 billion on the bull case for electric vehicle revenue.

“In preparation for its robotaxi service, Tesla could launch a human-driven ride-hail network first, delivering a highly profitable recurring revenue stream and limiting the downside of a failed autonomous service,” says ARK Invest, noting in its bear case, this model could add an extra $20 billion to Tesla’s operating profit by 2025. 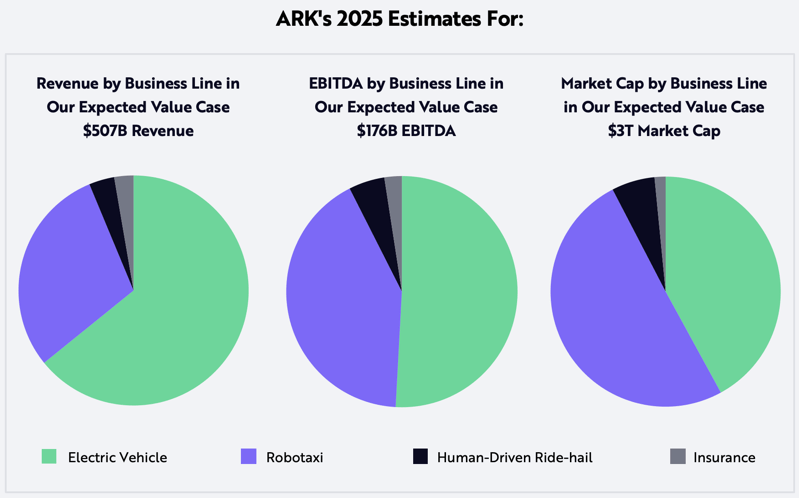 ARK Invest holds a bull position in Tesla, as shares of the latter make up nearly 10% holdings in its ETFs. The firm’s founder Cathie Wood predicted Tesla would hit $4,000 per share back in February 2018 and her bold call was met in January of this year, when Tesla shares hit $816, or $4,080 at a split-adjusted basis.