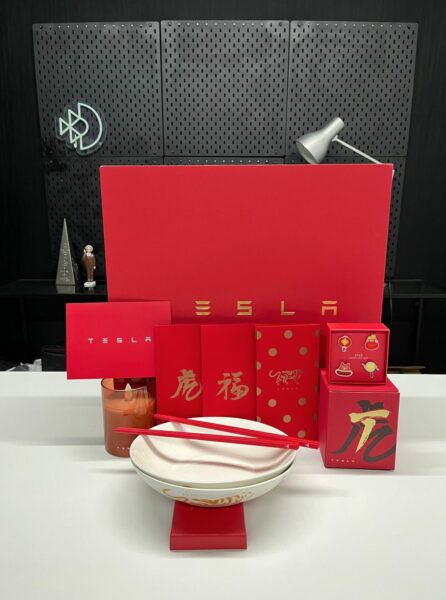 China and other Asian countries are drawing near to their annual Lunar New Year celebrations, and this year, Tesla customers will do so with a new gift basket from Tesla commemorating the event.

Tesla China sent a gift collection to some customers’ offices for China’s Lunar New Year, according to a photo of the gift set shared by @42how_ on Monday.

The photo depicts an array of different gift boxes in varied sizes, as well as a number of unwrapped boxes from the package including a pair of Tesla-labeled bowls and chopsticks, a candle and enamel pins, plus lucky ‘red envelopes’. The larger red square gift looks to be a calendar.

It‘s this time of the year again, Chinese New Year Gifts from Automakers in China. Thanks @teslacn for this CNY Gift Collection sent straight to our office.#Tesla #TeslaChina #chinesenewyear $TSLA @elonmusk pic.twitter.com/TQVp0EqBkp

This year’s Lunar New Year, set to start on February 1 and based on the Chinese calendar, will mark the Year of the Tiger, as also noted by the images of the tiger on the bowl and lucky envelopes.

Last year’s Lunar New Year celebrated the year of the ox, which Tesla picked up on in many of its decorations and celebrations around the holiday – even including Easter eggs depicting the company’s “S3XY” anagram representing its lineup of cars.

Take a look at all of the new Tesla Superchargers that went live across the globe this past week, courtesy of data from Supercharge.info and the TMC Forums: Date Opened Location Number of Stalls Power Rating Official Listing September 26, 2022 2 Rua do Miradoiro, Vigo, Pontevedra, Spain 12 250 kW Tesla September 26, 2022 Strevelinsvej 13, […]
Nehal Malik
10 hours ago