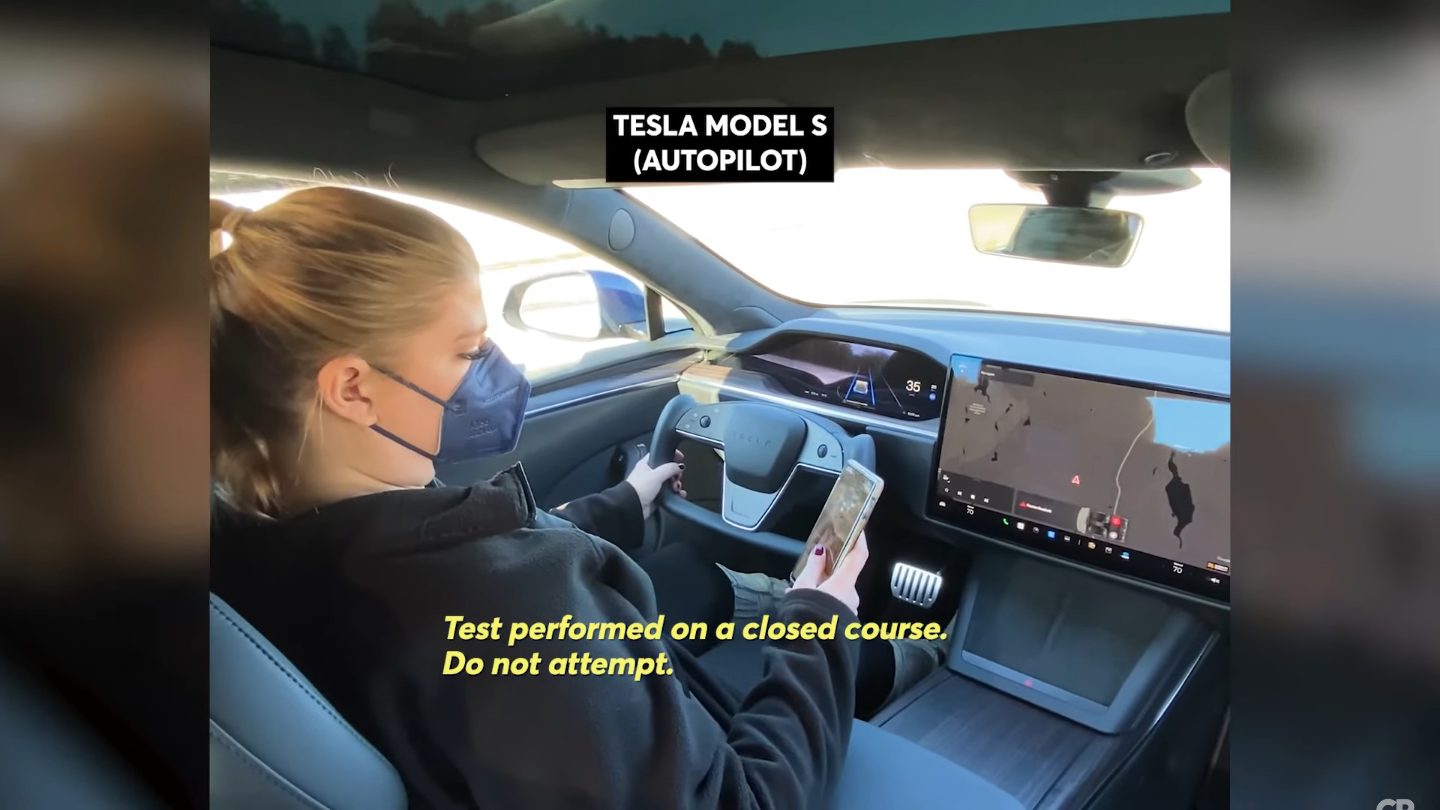 Out of the five, only GM’s Super Cruise hands-free driving system and Ford’s BlueCruise driver assistance suite, found in new cars like the Chevy Bolt EUV and the Mustang Mach-E, passed the publication’s safety test.

Driver monitoring systems in vehicles are designed to track the driver’s head and eye position to ensure driver attention while the car does most of the driving, including lane-keeping, acceleration, and braking at highway speeds and, in the case of Tesla’s FSD, which is currently in beta, for city driving.

While testing Tesla’s driver monitoring system, CR found the implementation to be inadequate as it did not warn the driver or suspend Autopilot when they had their eyes off the road for a while, even when the driver was clearly looking at their phone with one hand on the wheel for a significant amount of time.

“On Tesla Model Y and S vehicles with software version 11.0, we found that drivers could use Autopilot while the vehicle’s cabin camera was fully covered, which defeats the purpose of driver monitoring,” said Consumer Reports.

“If the camera detected that the driver’s eyes were off the road, the vehicle shortened how long a driver could take their hands off the wheel. But as long as the driver’s hands remained on the wheel, we saw no warnings whether eyes were on or off the road. Tesla did not respond to our questions,” said the publication.

The test also found that Tesla lets drivers engage Autopilot even when the in-cabin camera responsible for driver monitoring is completely obstructed. In the same situation, Ford drivers aren’t allowed to enable BlueCruise.

Tesla’s wasn’t the only driver monitoring system that failed, though, as BMW’s and Subaru’s performed similarly.

Points for driver monitoring systems are completely new to Consumer Reports’ scoring format for vehicles. Points awarded this year will be taken into account for the publication’s annual Auto Top Picks, which are due out next month on February 17, but CR will not start deducting points for systems that fail until next year.

That’s even more of a reason for Tesla to improve driver monitoring in its cars, considering the Model 3 was one of CR’s Top Picks last year and the company’s electric vehicles are favored to win a title or two this year as well.

Tesla is ‘recalling’ roughly 80,000 vehicles in China due to seatbelt and software issues, according to the State Administration for Market Regulation in a statement on Friday (via The Wall Street Journal). The regulator said that a recall filing had been for Tesla’s vehicles, which is currently the second largest automaker in the country. The […]
Peter McGuthrie
6 days ago