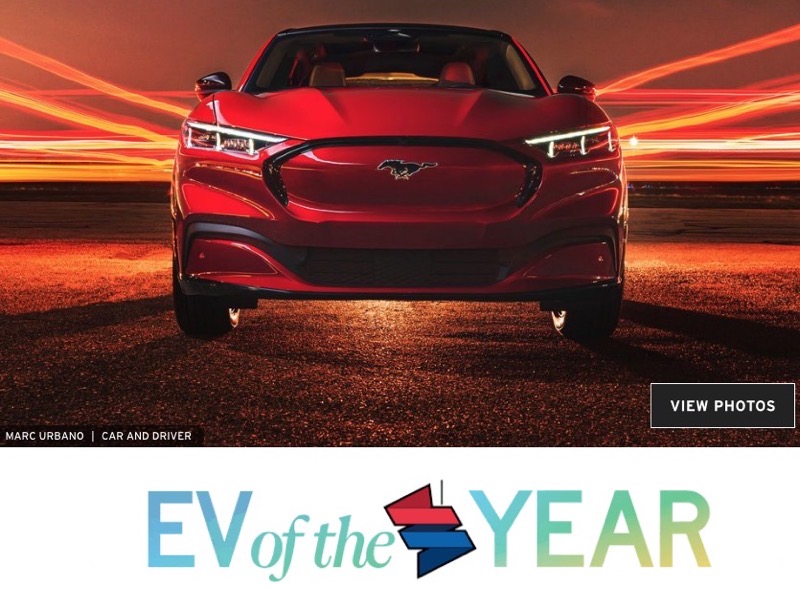 Automotive publication Car and Driver has announced its 2021 Electric Vehicle of the Year winner, and that goes to Ford’s Mustang Mach-E.

The worst thing about the Mustang Mach-E is the vehicle’s name, says Car and Driver.  There was also criticism tossed at Tesla as well for manufacturing some of its vehicles at its Fremont factory in California in outdoor tents.

“One key requirement for our EV of the Year—in addition to fun, value, and mission fulfillment—is that it make electric vehicles more desirable to buyers to a degree that moves the industry forward. That’s where the Mach-E stands out from the 10 other vehicles we evaluated. At long last, an automaker has given us an EV that competes head to head with Tesla on design, performance, price, and range, and it neither looks nor feels like it was built in a tent,” explains Car and Driver.

When it came to testing the Model 3, Y and S, Car and Driver rented them from private owners in its testing, while also skipping the “slow-selling, expensive Model X”.

As for other up-and-coming EV companies? “Rivian, Bollinger, Lordstown, and Lucid all said their EVs weren’t ready for our scrutineering. Maybe next year,” said Car and Driver.

Ford will cut costs and boost production of the electric Mustang Mach-E, just a few weeks after Tesla’s price cuts shook the electric vehicle (EV) sector (via CNBC). The Mustang Mach-E, considered a competitor to Tesla’s Model Y, saw prices slashed by an average of $4,500 across trims, now ranging from $600 to $5,900 off. […]
Peter McGuthrie
1 day ago

Consumer Reports has rated Ford BlueCruise as its top-rated driver’s assistance system, topping the publication’s last-year pick of GM’s Super Cruise and the Tesla Autopilot system, which has fallen further behind in the rankings over the past few years. The pick also pushed Tesla’s Autopilot toward the middle of the pack, with the outlet saying […]
Peter McGuthrie
6 days ago

Ford may be talking with Chinese automaker BYD about selling its Saarlouis, Germany plant, according to sources familiar with the matter in a report from The Wall Street Journal. Officials at Ford will head to China next week to talk about the potential sale of the German plant, which is currently planning to stop producing […]
Peter McGuthrie
1 week ago