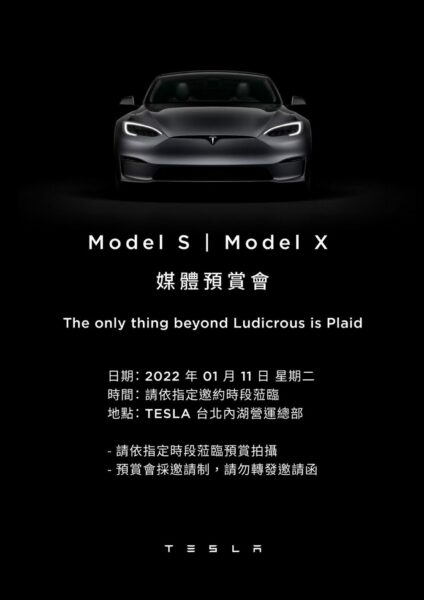 After Tesla stopped accepting Tesla Model S and X orders outside of North America last month, the company is now set to reveal its premium electric vehicles (EVs) in Taiwan.

The first Model S and X refresh units are set to take place in Taiwan, according to an email from Tesla shared by @Michael Hsu, founder of the Tesla Owners Taiwan club.

Hsu also reported that this will be a global debut of the native CCS2 charging port and that he will be going to and live streaming much of the media day private showing, before the viewing event for reservation holders.

First official Tesla unveiling of the Model S/X outside of NA to debut in Taiwan later today! Attending the media day private showing a few days ahead of reservation holders viewing. Confirmed this will also be global debut of native CCS2 charging port! @elonmusk @tesla pic.twitter.com/akEBmSGEvL

When asked how he knows about the CCS2 port, Hsu responded saying, “You’ll just have to trust me on that, wait for the livestream or pix.”

A live stream will be available from 1:30am PST/4:30am EST on January 11 from the Tesla Owners Taiwan Facebook page.

The flyer is also dated Tuesday, January 11 for reservation holders to view the unveiling of both Tesla’s Model S and X units.

Livestream will be held on our @TeslaOwnersTwn Facebook page at 5:30pm Taiwan time or 1:30AM PST. It will be in Mandarin and English. Here is link to the event: https://t.co/ZH5rOrOmJT https://t.co/AMuzS6q5iQ

Six new Tesla Supercharger stalls were also established in Taiwan just a few weeks ago on December 30, offering up to 250 kW charging rates.

In July 2021, Tesla also began retrofitting Taiwan Superchargers with both CCS2 and TPC connections, just days after Tesla began delivering its first vehicles in Taiwan with the CCS2 port.