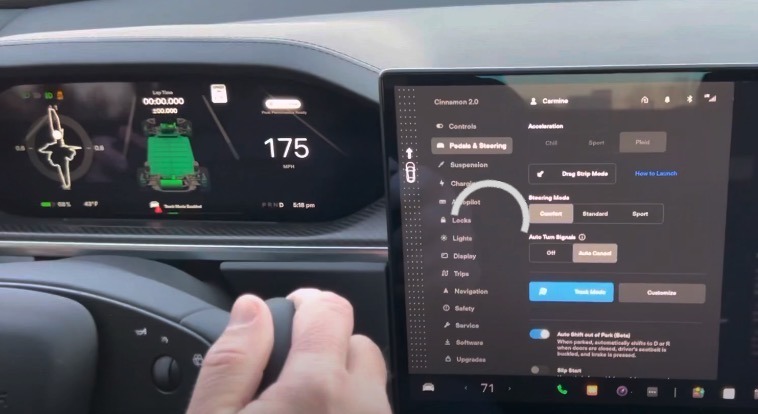 After releasing its 2021.44.30 software update for the Model S Plaid, bringing Track Mode, Tesla has also increased the top speed of the electric sedan as well.

Tesla originally advertised the top speed of the Model S Plaid as 200 mph (321 km/h) but in November, detailed the latter would only be possible with paid upgrades, such as proper wheels and tires.

The YouTube channel also shared a quick hands-on overview of Track Mode, which you can see below:

According to Carmine’s Import Service, the latest 2021.44.30 software update for the Model S Plaid has introduced what they believe to be a changed brake pedal feel (via @2022Plaid; the video is from a good friend of TMC forum member @Duke846), described as “better than the Model 3”. It’s unclear if this is actually new or not, but that’s what they described it as.

With Track Mode, Tesla appears to be enabling owners to push their Model S Plaid vehicles to the near limit, allowing them to reach a higher top speed once they hit the track. We’ll keep you posted as more videos will likely hit YouTube soon of Model S Plaid owners putting Track Mode to the test.

The top speed increase means the Model S Plaid is now also faster than the Lucid Air Dream Edition, which has a 168 mph (270 km/h) limit, that previously edged out Tesla’s electric sedan that was only at 163 mph.

Tesla Cyberwhistle Knockoffs Selling for Over 50% Off in China