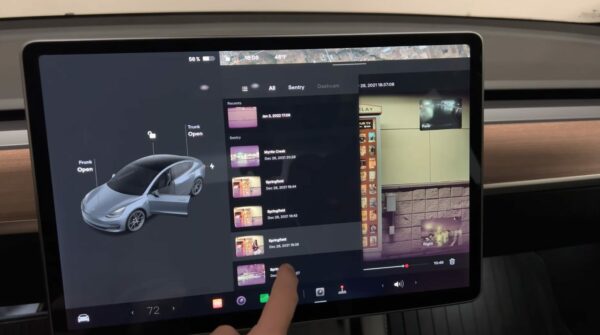 After Tesla quietly debuted new Model 3 and Y cars with AMD Ryzen chips, we’re now seeing one of the first hands-on videos with the faster processor in a 2022 Model 3.

A new video shared on Tuesday by RVT shows the Tesla owner’s home Wi-Fi at 400 Mbps in a 2022 Tesla Model 3, which sports AMD Ryzen hardware to power the infotainment system. The owner’s Model 3 has a build date of December 21, 2021 from Fremont, California.

The video starts with the driver performing a few speed tests, then visiting various streaming services.

The internet shows impressive responsiveness, with the driver even able to stream YouTube videos in 4K without any interruptions.

The driver also launches a few games on the infotainment screen and moves some apps around while running to show how responsive the chip itself is when dealing with multiple tasks at once.

It’s also rumored that European customers will get Model 3 and Y units with an AMD Ryzen chip, and models in China have already been revealed with the new chips.

Comparisons between the AMD Ryzen chip and the old Intel Atom Chip show in bitter detail how much more quickly the new hardware runs.

You can see the full video from RVT below, featuring AMD Ryzen in a Tesla Model 3 playing games and running other apps on 400 Mbps of wireless speed.

Tesla first debuted AMD Ryzen hardware in its Model S and Model X refresh vehicles; the new hardware is also found within Sony’s PlayStation 5 gaming console. It’s unclear if Tesla will offer a retrofit option for Model 3 and Model Y vehicles that have Intel hardware, to upgrade to AMD Ryzen.