Tesla was the Top-Selling Auto Brand in Norway for 2021

After last year’s electric vehicles (EV) sales in Norway made up 54 percent of all new car sales in 2020, the country has outdone itself once again.

EVs accounted for almost two-thirds of total vehicles sold in Norway in 2021, with Tesla becoming the top-selling automotive brand overall, according to Reuters.

Tesla’s Model Y was the Top-Selling EV in Norway for September https://t.co/aoBLTa4kK1

In addition, U.S. automaker Tesla garnered an 11.6 percent market share in Norway’s overall market in 2021, officially becoming the number one brand sold in the country, according to data from the Norwegian Road Federation (NRF) on Monday.

The Tesla Model 3 was the most popular model sold in Norway at 12,058 units, placing ahead of the second best-seller, the Toyota RAV4 Hybrid (the only gas hybrid in the top 10), as well as the Volkswagen ID.4 in third place. 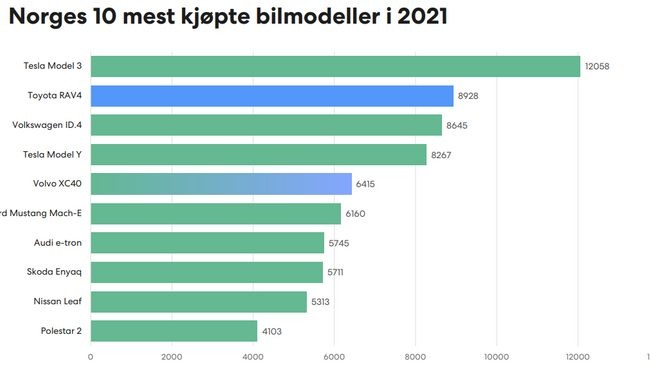 Among the top 10 vehicles sold in Norway in 2021, the Toyota RAV4 Hybrid was also the only vehicle with an internal combustion engine (ICE).