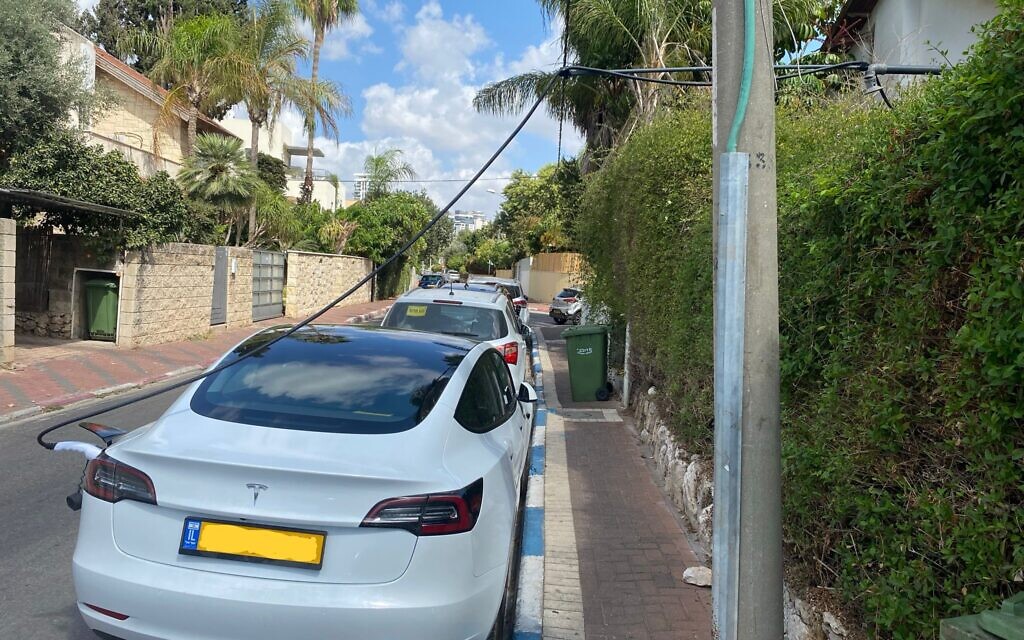 Image via Sharon B.; Times of Israel

Israel has more than doubled the number of electric vehicles (EVs) on its roads, from 4,500 in 2020 to over 9,000 registered this year — reports The Times of Israel. However, owners of battery-electric cars in the country are facing a rather unique problem: there’s nowhere to charge their cars.

Deployment of public charging infrastructure simply isn’t keeping up with the rate at which Israelis are switching over to plug-in hybrid and all-electric vehicles.

This, along with garages and indoor parking being rather uncommon in Israel, has led to residents coming up with some unorthodox solutions — running thick charging cables from an outlet inside their house out onto the street, for example.

The Energy Ministry has budgeted $9.6 million USD for the development of a nationwide network of 2,500 public EV charging outlets across numerous locations by mid-2022. Approximately 1,000 charging sockets have been installed so far.

In a statement, a spokesperson for the Energy Ministry said these stations would be “installed on highways, local authority areas, malls, parking lots, public centers, and workplaces,” including major malls, movie theatres, and even IKEA parking lots.

In addition, Tesla has installed six ultra-fast DC Superchargers around urban centers across Israel, with the very first installation going live back in March. Tesla vehicles took 60% of 2021 imports and are the most popular EVs in Israel.

Some Tesla owners in Israel are charging their vehicles by dangling cords from living room windows to the street, to allow for AC charging of their cars.

Israel is well on its way to transitioning to electric transportation, but there simply isn’t enough public charging infrastructure to support the growing number of chargeable vehicles. EVs, in particular, saw a meteoric rise in adoption this year, with Israel importing 7,800 electric cars in the first three quarters alone.

Tesla has dominated Israel’s EV market, capturing 60% of sales for 2021 despite only having launched in the country earlier this year with limited availability. Tesla is gearing up to launch the Model Y in Israel in early 2022.

Since entering the Australian market in August, the Tesla Model Y has been making waves, with many customers flocking toward the electric SUV in recent months. Tesla delivered 4,359 Model Y units in Australia in September, as reported by The Driven. The figure nearly doubles the next top-selling EV in the country, showing a dominant […]
Peter McGuthrie
9 hours ago