Starlink, SpaceX’s high-speed satellite broadband service, made it out of beta last month and continues to both bring more users aboard and launch more satellites into low-Earth orbit (LEO).

As more users are added to the network, median download and upload speeds are bound to see a slight reduction — and that is exactly what a new report from Ookla Speedtest examining third-quarter data from users across the world found.

After an impressive showing last quarter where Starlink handily exceeded the median download speeds offered by fixed broadband providers in Canada and was just shy of the same in the U.S., the service ranked closely behind fixed broadband in both countries for Q3 2021.

However, Starlink is still a far better option than any other satellite internet provider, both of which offer download speeds that are a fraction of Starlink’s and latency that is 15-20 times as high. Starlink has basically become the only viable option for rural and remote customers in the U.S. who don’t have access to fast fixed broadband.

The average latency for Starlink this quarter in the U.S. was 44 ms — definitely not lower than fixed broadband’s 15 ms median, but definitely impressive for an internet connection being beamed to your house from space.

Ookla‘s data also found that Starlink’s performance varies greatly from one county to the next. 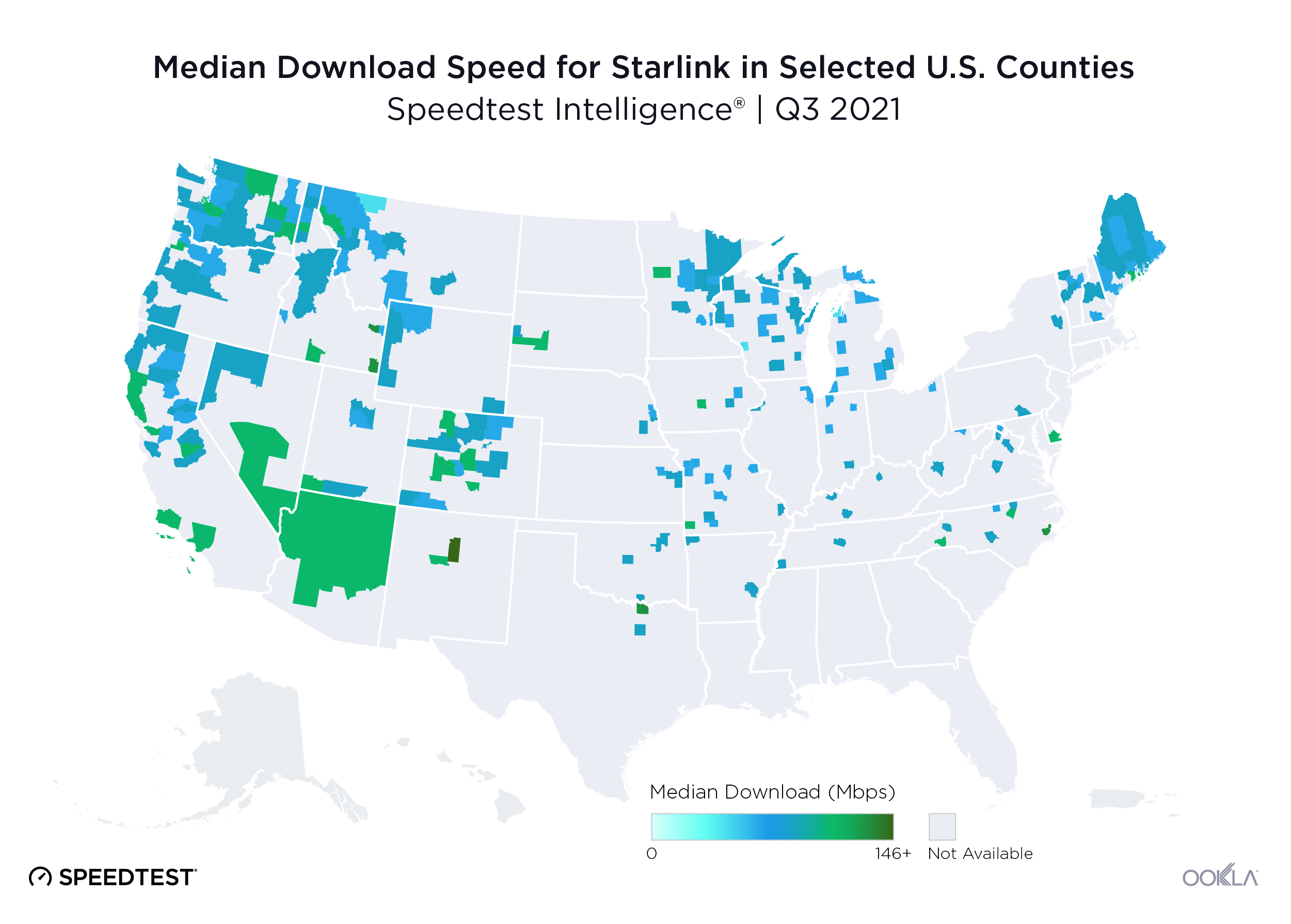 Even so, the slowest median download speeds on Starlink (observed in Drummond Township, Michigan at 46.63 Mbps) far exceed anything other satellite internet providers have to offer and are well above the FCC’s Baseline performance tier of at least a 25 Mbps download speed.

As for Canada, Ookla observed median download speeds of 84.55 Mbps across Canada on Starlink, down slightly from 86.92 Mbps in the previous quarter and trailing just behind average download speeds of 90.67 Mbps over fixed broadband.

With how big of a connectivity gap exists across Canada and the country’s high rural-urban distribution, Starlink remains a practical and relatively affordable option for Canadians.

Starlink had much higher latency than fixed broadband, at a median of 56 ms compared to just 12 ms for broadband, but will still be a godsend to those who don’t have access to an uncapped internet connection at all.

SpaceX has launched Starshield, a new, secured satellite service geared toward government entities and national security applications. It sounds kind of like Starlink, but for the government instead of regular consumers and capable of more than just providing an internet connection. “Starshield leverages SpaceX’s Starlink technology and launch capability to support national security efforts. While Starlink […]
Nehal Malik
11 hours ago