After being named the quickest 0-60 mph production car ever and breaking the 9-second quarter-mile threshold, the Tesla Model S Plaid has also taken the crown of quickest-charging electric vehicle (EV) ever, according to Car and Driver.

The popular automotive publication recently tested the Model S Plaid’s charging speed at one of Tesla’s V3 (250 kW) Superchargers to see just how much faster (if at all) the all-electric luxury sedan charged as compared to the rest of Tesla’s offerings and other EVs.

Car and Driver found that the Model S Plaid is capable of sustaining a V3 Supercharger’s peak charging power of 250 kW for almost five minutes, which on its own is impressive, and charges from 10% to 90% in just 38 minutes. That’s some nine minutes (or 19%) faster than a 2021 Model S Long Range Plus. 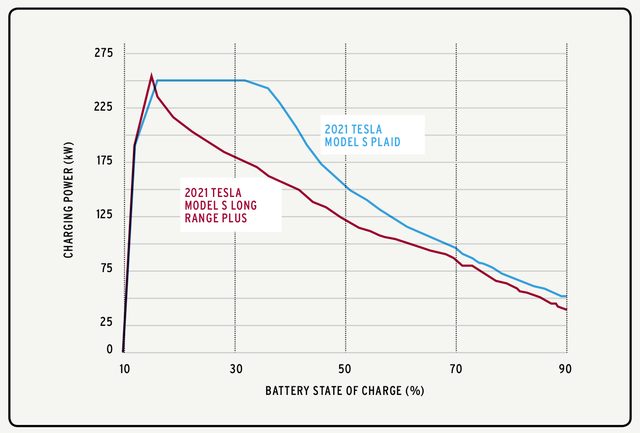 According to the publication’s calculations, 38 minutes of charging a Model S Plaid will net you 224 miles (360 km) of highway cruising at 75 mph before you have to stop for another top-up.