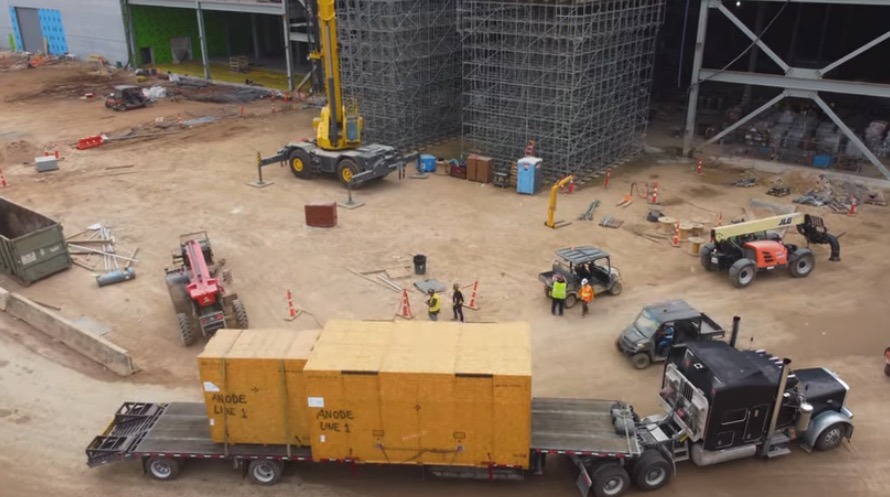 As Tesla’s Gigafactory Texas nears completion, one watchful user has noticed new equipment thought to be for use in 4680 battery cell production.

YouTube drone pilot Jeff Roberts has spotted 4680 production equipment labeled “Anode Lines” at Tesla’s Gigafactory Texas, alluding to the company’s plans to produce its own 4680 battery cells. The words were written on boxes being brought in on the back of a truck, with another set of the boxes being labeled “Cathode Lines.”

Check out the 8-minute mark of the video below. Roberts says he was about to end his recording for the day but flew back up in the air when he saw some delivery trucks arrive:

“We got lucky today with the arrival of the Cathode Line 1 and Anode Line 1 production equipment deliveries and it didn’t sit in storage long; within minutes of arrival, the Anode Line 1 truck headed deep inside of the battery cell production area which is the Northwest “quadrant” of the factory!”, explained Roberts on Tuesday.

“This means 4680 batteries could be ready to go into production vehicles soon and it all started on DAY 468; coincidence???!”, added Roberts.

Last month, Elon Musk responded “Hell Yeah” to a user suggesting that Tesla holds an opening event for Gigafactory Texas, though no plans or updates for the event were shared.

In September, Tesla shared building and permit plans for the Texas Gigafactory, which is set to have an address of 12733 Harold Green Road in Austin, and will include three large production buildings, in addition to a few smaller structures.