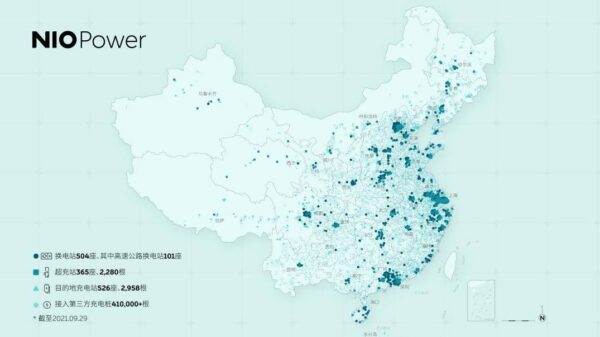 China-based electric automaker NIO saw revenue increase by 127 percent in the second quarter, and following the news, the company has also reached a major milestone with regards to its battery swap stations.

NIO also launched a 75 kWh hybrid battery pack for its cars, set to begin selling in November and including a combination of ternary lithium and lithium iron phosphate (LFP) in a single battery pack.

Last month, NIO also announced plans to make drivers pass a quiz before being allowed to use its driver assist system, in hopes to prevent drivers from using the technology incorrectly.

The Tesla rival has also been predicted by some analysts to replace Tesla as China’s top electric vehicle (EV) automaker in the years to come, amidst strong sales despite the ongoing semiconductor chip shortage.

NIO also announced plans in May to begin selling its EVs in Norway, competing with Volkswagen and Tesla in what is the world’s quickest country to adopt EVs.

Tesla has left Volkswagen in a tough spot on the veteran automaker’s home turf after recently dropping the prices of its Model 3 and Model Y electric vehicles (EVs) by up to 16.8% in Germany. The discounts, which Tesla said were a result of “normalizing” inflation, have led to increased demand for and interest in […]
Nehal Malik
2 days ago

Transportation officials in San Francisco are trying to slow the rollout of robotaxis in the city, arguing that they can pose a road hazard to other drivers and that more data is needed before they can be allowed to freely roam the streets — reports NBC News. San Francisco has become a bit of a […]
Nehal Malik
2 days ago

Lucid Motors saw its stock price jump by as much as 98% on Friday, closing at $12.87 per share (up 43%), as rumors of Saudi Arabia’s Public Investment Fund (PIF) considering a full takeover of the luxury electric automaker made the rounds — reports the Silicon Valley Business Journal. The news represents a breath of […]
Nehal Malik
3 days ago