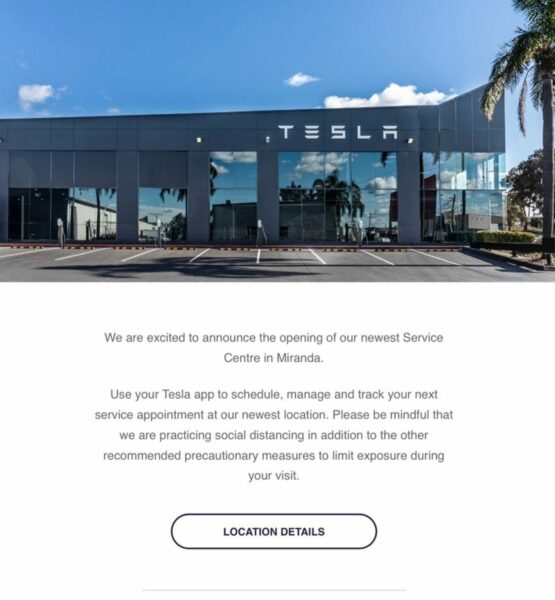 As Tesla expands its presence around the world, it will require the company to expand its complex network of service centers, Superchargers and stores, especially in underserved regions of the world that don’t have a direct Tesla presence.

Tesla has opened a new service center in Miranda, New South Wales in Australia, according to @TeslaGong. The service center, located in the suburb south of Sydney, comes as Tesla continues to expand throughout Australia – hopefully even including a new vehicle soon.

Other nearby service centers exist in Sydney’s Alexandria and Chatswood districts, with a number of others scattered across Australia.

This is the most logical next step in the NSW @Tesla roadmap here in Australia is a Western Sydney Supercharger and Service centre It is an underserved region for now.

Congratulations on the #Miranda #Tesla #ServiceCentre 🙏🏾🙏🏾

Last month, the Tesla Model Y reportedly arrived in Australia, potentially hinting at an upcoming launch in the region. Earlier this summer, Tesla also dropped the price of the Model 3 in Australia, with hopefuls looking forward to receiving the Model Y.

Australia’s Tesla vehicles come from Gigafactory Shanghai, just as Europe’s currently do ahead of the company’s opening of Gigafactory Berlin – set to happen this year.

Australia does seem poised to receive the Model Y in the coming months, as European buyers received their first Model Y units last month for the first time, as shipped from Gigafactory Shanghai.

Tesla Model Y buyers in Australia could bring the SUV’s price down by as much as $10,000, making it as affordable as the Mazda 3 with a new tax deal, according to The Driven. To achieve this level of savings, buyers must qualify for a combination of incentives including the country’s new fringe benefit tax […]
Peter McGuthrie
16 hours ago