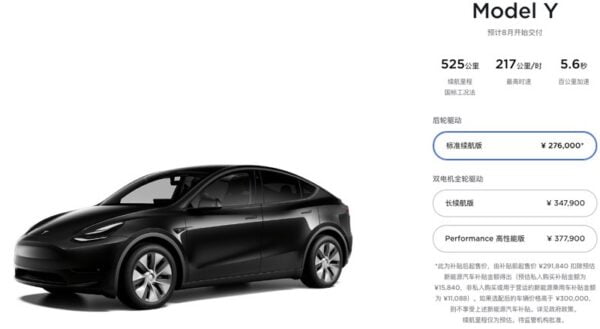 Just a week after filings hinted at multiple Model Y variants in China, Tesla plans for an even longer-range variant of the electric SUV have been revealed according to filings with the Chinese government.

A new “super long-range” Tesla Model Y variant has been registered alongside previously-reported variants of the electric vehicle (EV), and it will reportedly have 640 km (398 miles) of NEDC-rated range, according to The Driven.

The filings do not include information about the size of the unit’s battery, though it does say the Model Y will be a dual-motor with a 137kW motor in the front with a 184kW motor in the back – offering a possible total of up to 559Nm torque.

This range rating may look more like 584 km (363 miles) for the average driver, though it’s still more than the Model Y Performance which currently has the highest range amongst the variants, and which features a range of just 528 km (328 miles).

The price for the Super Long-Range Model Y was not detailed in the filing, and it is also not clear when this or other new Model Y variants will become available in China.

Earlier this month, right-hand driving (RHD) Tesla Model Ys arrived in Australia, hinting at a launch within the next several months. Still, it’s not clear if the new Shanghai-made Model Y variants will become immediately available upon the electric SUV’s launch.