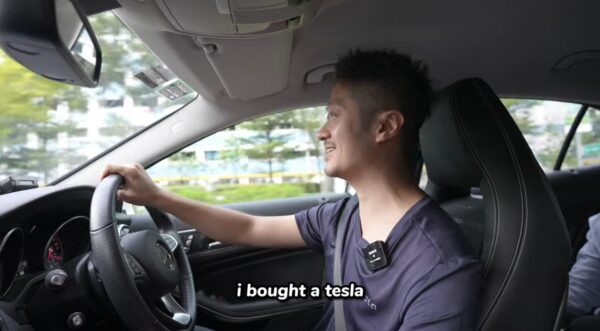 Tesla’s electric vehicles (EVs) are still becoming mainstream, with many still just starting to get their very first EVs.

Singapore resident Ken, known as @PakPakChicken, purchased a Tesla Model 3 Performance and shared a short review of the electric sedan in a video shared on his channel Chicken Genius Performance on Wednesday.

In the video, he talks about the driving experience, the interior, maintenance, and a handful of other aspects of owning the Tesla in Singapore, which cost him the equivalent of $170,000 USD, due to fees from government controls on limiting vehicles.

my Tesla here. it's great. It's been a while since something excites me.

Thank you to the Tesla Team in Singapore, I'm grateful to meet such a team. @elonmusk https://t.co/Qxcg09eKPJ

Tesla Model 3 deliveries in Singapore began less than a month ago, and cost roughly $231,370 ($170,000 USD) after registration fees, road taxes, and other import costs. The Performance variant offers an increased range of 567 kilometers (352 miles), compared to just 448 kilometers (278 miles) for the Standard Range variant.

The host explains in the video that after buying it, he’s decided to give the Model 3 to his mother, who is seen in the video saying she’s very excited.

Purchased on the island city-state of Singapore, the Tesla Model 3 is currently the only available Tesla model in the region, but Ken also says he plans to get a Model Y for his mother once they become available. Then, he’ll be able to take the Model 3 Performance.

The first Tesla V3 Supercharger recently launched in Singapore – and the first in Southeast Asia in general – at Singapore’s Orchard Central shopping mall.

As Tesla continues with plans to open its Superchargers to non-Tesla vehicles, the automaker plans to shift its charging rates and times at certain locations. Tesla is updating its charging rates at select Supercharger locations starting on Wednesday, September 28, according to tweet spotted by @Whole Mars Blog. In the screenshot, Tesla says that users […]
Peter McGuthrie
3 hours ago