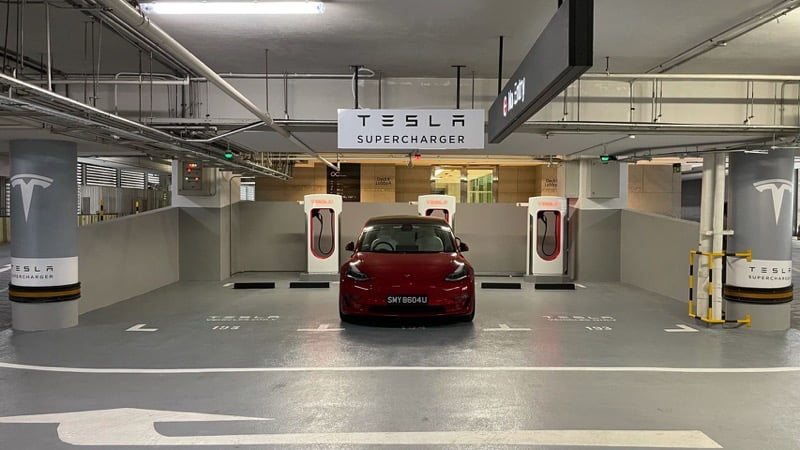 Tesla has announced the launch of the first V3 Supercharger in Southeast Asia, debuting in the island city-state of Singapore (via @TeslaOwnersSG).

Country Manager for Tesla in Singapore, Christopher Bousigues, made the announcement on Monday morning local time.

“Delighted to announce that ahead of deliveries beginning soon in Singapore we have launched the first Tesla V3 Supercharger in South East Asia today,” said Bousigues.

“We want to thank LTA [Land Transport Authority] and Minister S Iswaran for their support in launching the Sandbox program as part of the mission of accelerating the world, and Singapore’s, transition to sustainable energy,” the Tesla country manager continued to say.

The new V3 Tesla Supercharger has been installed at Orchard Central shopping mall, located at 181 Orchard Road, in the heart of Singapore’s famous shopping district, with three charging stalls available.

Singapore Minister S. Iswaran told The Straits Times the new V3 Supercharger will shorten charging times for Tesla owners. Tesla’s V3 Superchargers can charge up to 250kW per car, or up to 1,600 km per hour (1,000 miles) at peak efficiency.

Tesla said back in 2019 the introduction of V3 Supercharging at the time would “cut the amount of time customers spend charging by an average of 50%, as modeled on our fleet data.”

A new grant will also subsidize EV charger installations in Singapore, with applications to open on July 29. The grant will offer up to $4,000 SGD per charger, subsidizing 50% of installation costs.

Tesla launched sales in Singapore back in February of this year, with recent images earlier this month showing the first orders have since arrived on the island.