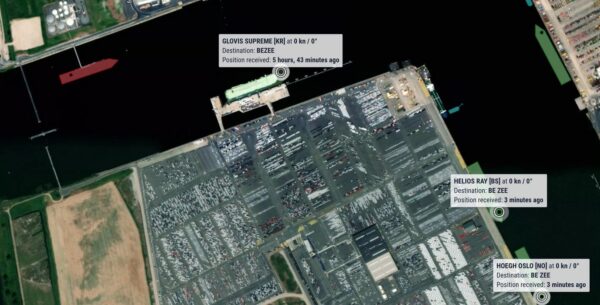 A major shipment of Tesla’s vehicles has arrived in Europe, just weeks before the company’s first Model Y deliveries are expected to be delivered.

Three ships were spotted unloading Tesla Model 3 and Y units in Zeebrugge, Belgium on Monday, according to Morten Grove.

The Tesla units were caught in never-before-seen volumes, unloading from the watercrafts Glovis Supreme and Helios Ray sporting both Model 3 and Y units, while the Hoegh Oslo carried only Model 3 units.

The news comes just weeks after Tesla’s first Model Y units arrived in Europe, confirmed earlier this morning by the company, noting the cars were made at Gigafactory Shanghai in China, ahead of Gigafactory Berlin’s production start.

Recently, Tesla Model Y vehicles were spotted with ‘Not Model Y’ branding on the side in The Netherlands, as part of a marketing campaign.

Tesla’s Gigafactory Berlin completion is imminent, with CEO Elon Musk saying the German factory will hopefully produce cars by October. The Grünheide, Germany production facility has been under construction for much of the past year, and has faced a number of delays – though Ministers of Brandenburg have said the process is nearing full approval.

Tesla’s big AI Day 2022 is here and it is slated to start at 6:15pm PDT/9:15pm EDT from Palo Alto, California. The event is to recruit engineers to “build the future of AI”. According to the AI Day invite, attendees will “learn about Tesla’s latest developments in artificial intelligence, including Full Self-Driving, Tesla Bot, Dojo […]
Sarah Lee-Jones
32 mins ago

A set of photos shared this week show that Tesla’s Powerwall and Solar Roof are super durable and will continue working after exposure to storms, as noted by one roofing company. @Tesla retweeted photos of a Tesla Solar Roof and Powerwall that withstood winds and rain from Hurricane Ian on Thursday. The photos, originally shared […]
Peter McGuthrie
1 hour ago