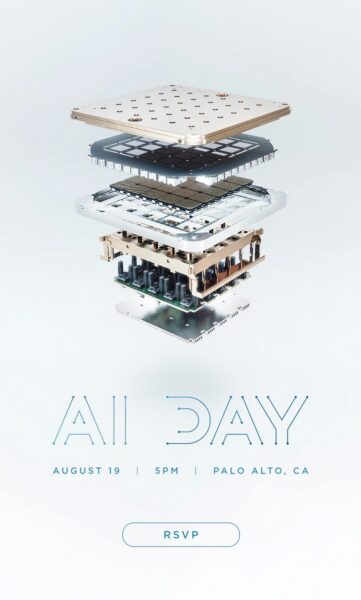 After CEO Elon Musk’s announcement of Tesla’s AI Day event on the calendar for Thursday, August 19, the company is reportedly starting to send out invitations for the upcoming event.

Tesla is sending invitations out for its AI Day event, which share images of a custom stack of hardware, according to The Street (via @Sawyer Merritt). The invitation also says attendees will “get an inside look at what’s next for AI at Tesla beyond our vehicle fleet.”

The mention comes just weeks after Tesla’s Q2 earnings call, in which Musk stated that he thinks “people will think of Tesla as an AI robotics company as we are a car company,” adding that the company is “developing one of the strongest hardware and software AI teams in the world.”

When clicking to RSVP on the initial invitation, users are led to a page with more details and an opportunity to submit to be chosen for the event.

Join us in Palo Alto, CA on August 19, 2021 at 5 p.m. PDT. This invite-only event will feature a keynote by Elon, hardware and software demos from Tesla engineers, test rides in Model S Plaid and more. Attendees will be among the first to see our latest developments in supercomputing and neural network training. They’ll also get an inside-look at what’s next for AI at Tesla beyond our vehicle fleet.

If you have received an email invitation for this event, please submit the form below using the same email address to let us know you’d like to attend. Space is limited and we will be confirming the attendee list closer to the event date. If you are chosen to attend AI Day, you will receive an email confirmation with additional event details.

The custom stack of hardware displayed on the invitation is thought to be related to Tesla’s “Project Dojo,” the company’s neural network training supercomputer.

Dennis Hong, Professor, Mechanical & Aerospace Engineering, UCLA, and Director, RoMeLa: Robotics & Mechanisms Laboratory, recently teased his involvement with Tesla and upcoming AI day. He said he was under a non-disclosure agreement and didn’t want to take away spotlight from Tesla on Twitter.

Back in June, when Musk first announced AI Day, he said the event would “go over progress with Tesla AI software & hardware, both training & inference.” He also added that the event’s “purpose is recruiting.”