Tesla has placed a nationwide hold on delivering any Model S vehicles, both Plaid Long Range, according to reports from several buyers who received messages from Tesla, delaying their delivery (via Reddit).

Tesla Model S units have reportedly not been getting delivered on time for over a week, with many buyers’ units simply sitting at the delivery center – some for as many as two weeks.

The news applies to all refreshed Model S units, including the Plaid and Long Range variants. 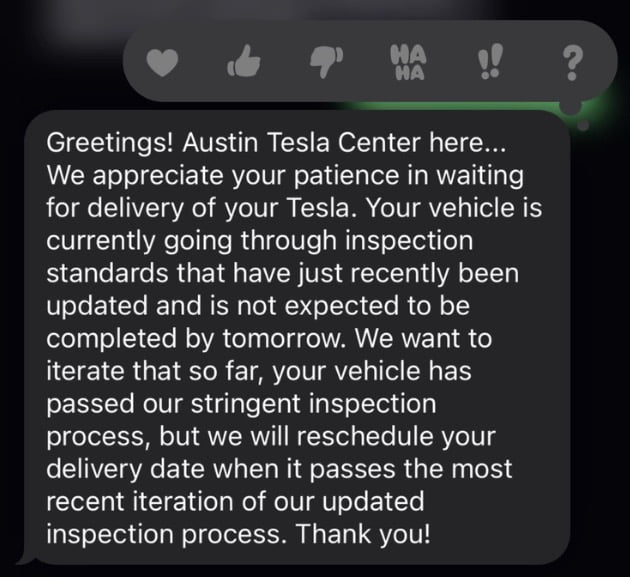 One buyer said they received a phone call in which Tesla said their delivery would take longer than expected, while another buyer received a text message from the company saying their vehicle was “currently going through inspections standards,” and later continuing, “[the delivery] is not expected to be completed by tomorrow.”

The message added that the company had its inspection standards updated, though it also said that the vehicle has so far “passed our stringent inspection process.”

Many on the thread speculated as to whether the hold could be a manufacturing issue that Tesla wants to fix rather than making a recall down the road, with some claiming that it could be a software issue. It’s unclear what is causing the delay, but we should find out soon enough.

Update: According to Sawyer Merritt, Tesla is apparently having trouble getting white seats, carbon fiber trim and displays, plus some rocker panels may be loose:

So I was told yesterday that the Model S is currently on containment hold. I wanted to learn why before tweeting anything. I’ve been told a myriad of reasons is for the hold. Tesla is apparently having trouble getting White seats, carbon fiber trim and display screens.

Some rocker panels also may be loose and need to be serviced. I also heard updated inspection process by some soon to be owners. I wouldn’t expect the hold to last super long, but these things you just can’t predict with precision so we’ll see. I hope it doesn’t!